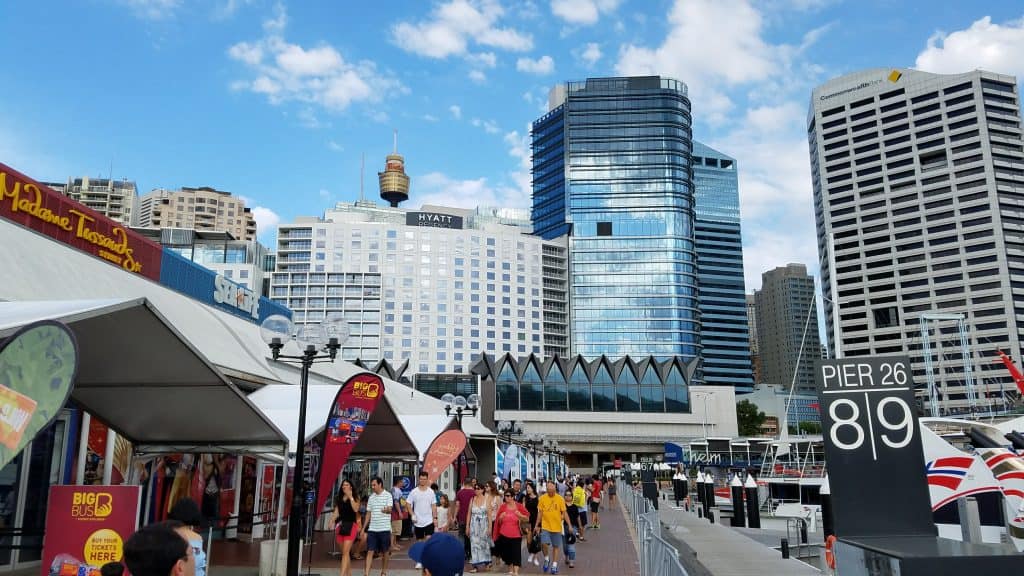 I originally booked three nights at the Park Hyatt with points.  Last minute I switched my first night in Sydney to the Regency as I found a great deal for one night paying cash.  On top of this, I heard that the Regency Club was not yet open so I could score a bonus 2,500 points and have breakfast in the restaurant.  I also had an expiring Diamond Suite Upgrade through Hyatt Gold Passport that I used; the Park Hyatt doesn’t allow DSUs. 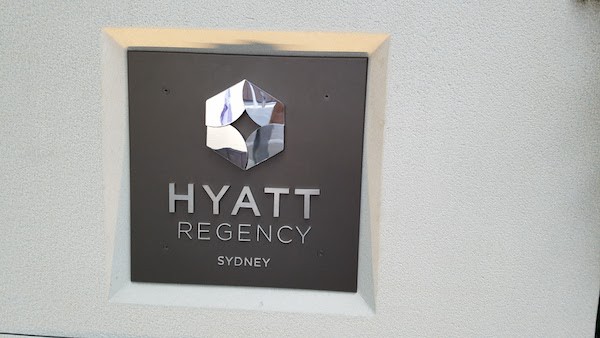 Location: The Hyatt Regency Sydney is located in Darling Harbour, Sydney’s version of San Francisco’s Fisherman’s Wharf.  It is quite touristy.  You will find the Hard Rock Cafe and Madamme Tussauds here.  Sydney’s Sea Life Aquarium is steps from the Hyatt’s back entrance.  The Convention Center is across the harbour.  You can actually access the harbour directly via the back entrance to the hotel.  A set of stairs lead under the viaduct and spits you out right next to the aquarium. 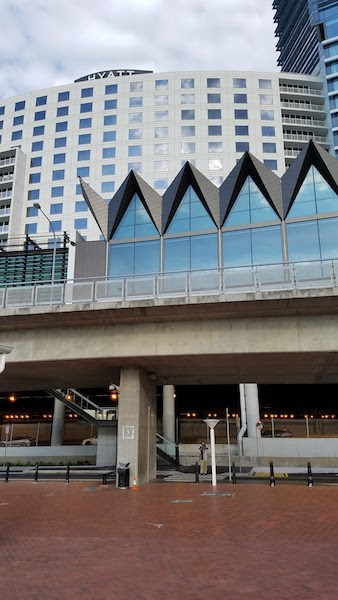 The Hyatt Regency Sydney is also on the west side of the Central Business District.  You can walk to the shops of Pitts Street or walk about 25 minutes to the ferry terminals and Opera House.

Getting there from the airport, your best bet is a taxi.  You can try your hand at an Uber but I was unable to get one after my morning arrival (the app said none were available).  You can take the train in, which is what I did, but the closest station is a good 10 minute walk — with bags it can be difficult.

Check In: I arrived quite early after my overnight flight in to Sydney.  I had used a Diamond Suite Upgrade and was told my room wouldn’t be ready for a few hours.  I was tired and asked if there was any room available, it didn’t matter if it was my suite.  The front desk agent was able to get me a suite, just not as nice as my original, which I was fine with.

I was surprised at the lack of knowledge on the part of the front desk agent in regards to Diamond member benefits.  The hotel had just been rebranded 4 weeks prior, but I had to ask in order to get any info about welcome amenity, breakfast, club, etc.

The Regency Club was opening the next day so I was not able to use it.  I asked about the 2,500 club closure points and she said she would look into it.  I couldn’t have been her first Diamond guest in 4 weeks, could I? 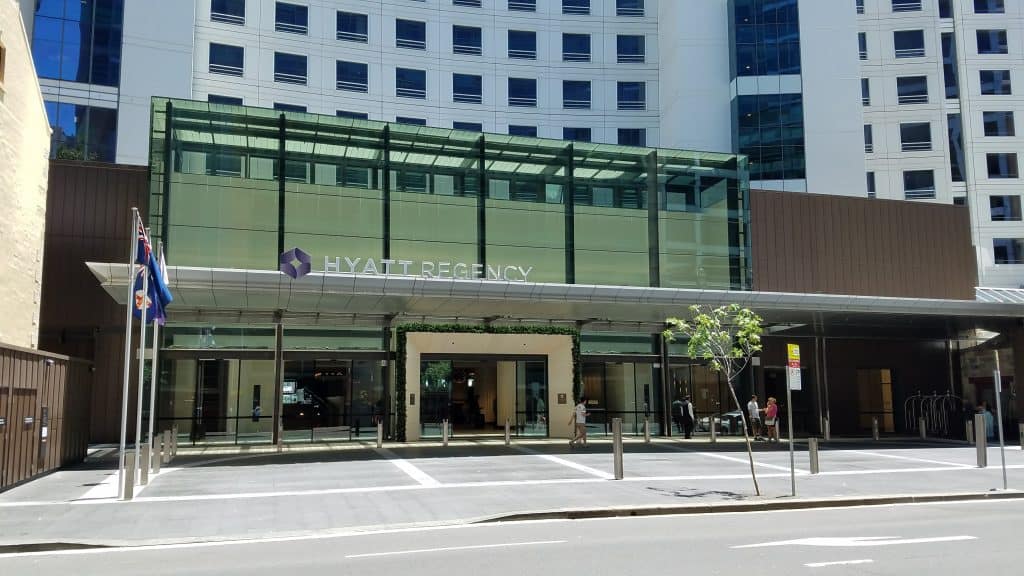 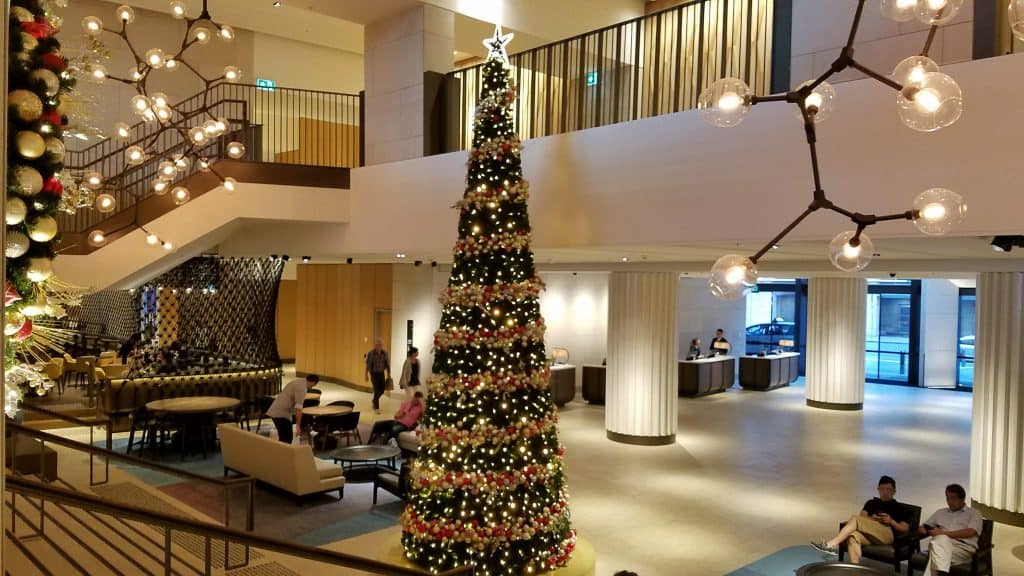 Room: The room I was given was 602 in the “old” building.  There is a new “tour” that is slowly coming online, I was told the first 3 floors were now being utilized.  My room was at the end of the hall on the 6th floor (out of 14 I believe).   My best understanding is that it is categorized as an “Executive Suite”.

When you first enter there is a sitting area that can be closed off from the bedroom with sliding doors.  There is a fold out couch against one wall.  A small desk is in one corner and a arm chair in the other.  A TV is mounted on one wall. 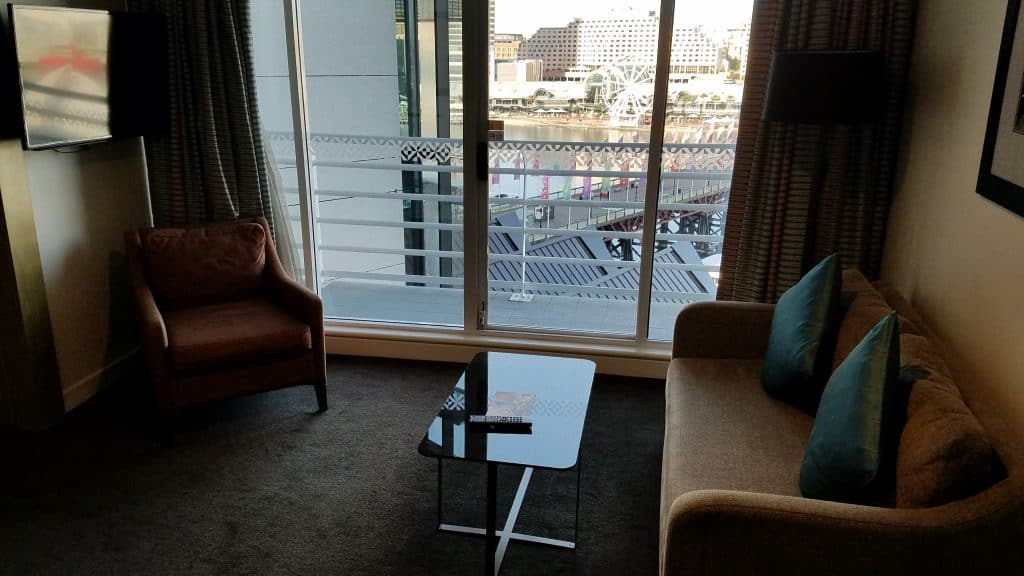 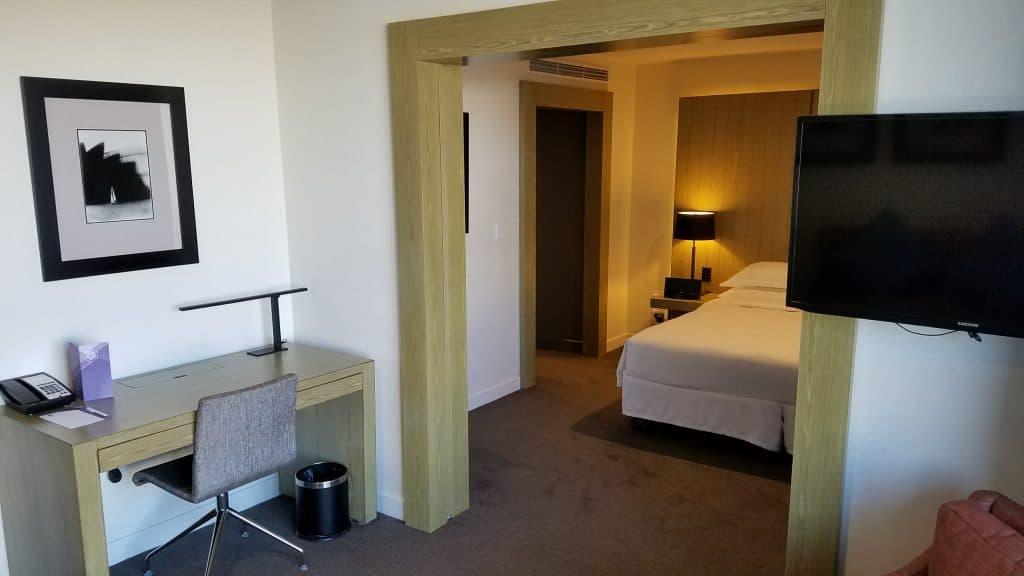 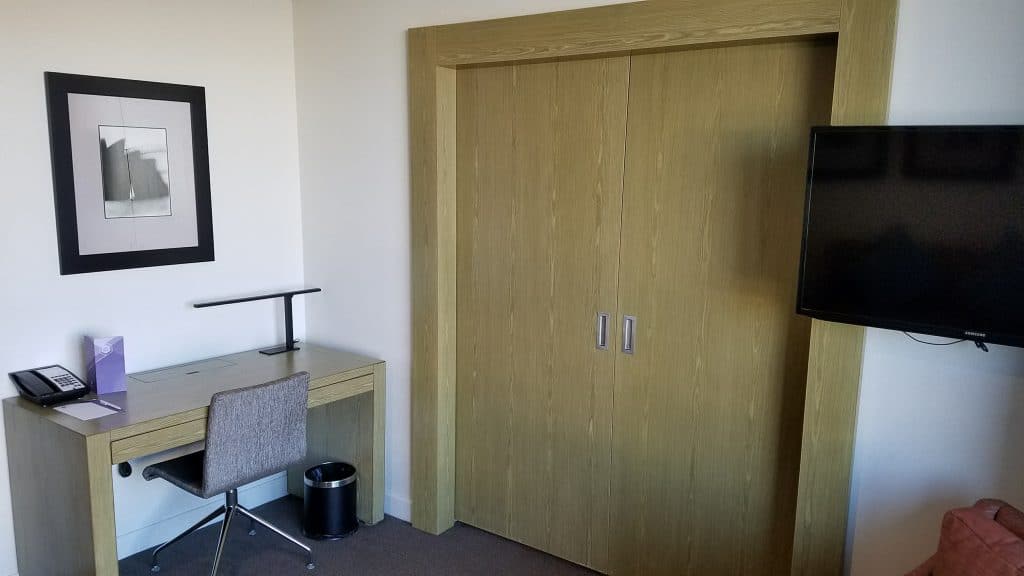 The bedroom portion was standard Regency.  Nice and functional.  I did appreciate that the bed had a true duvet cover (not just two sheets on either side of the duvet). 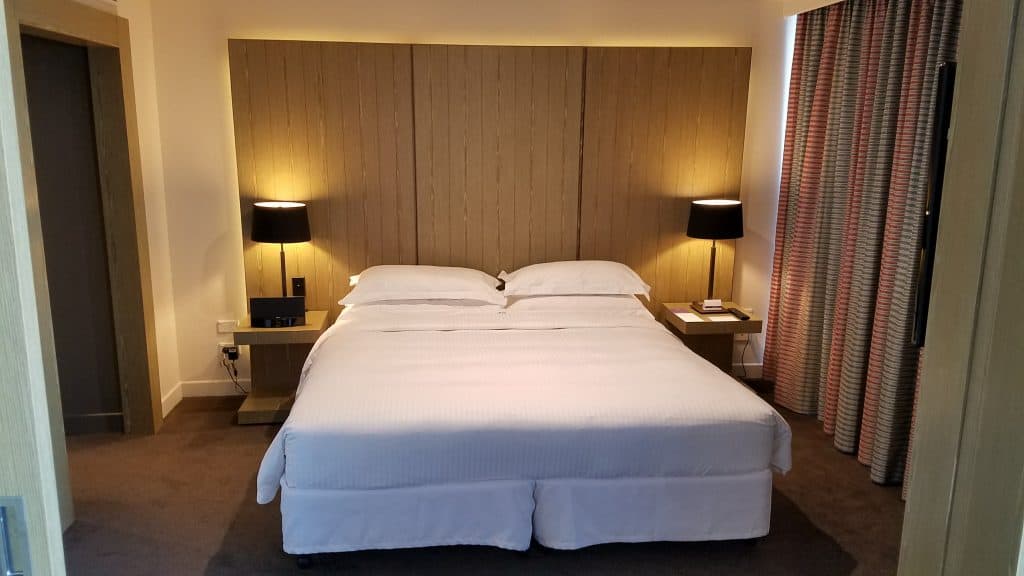 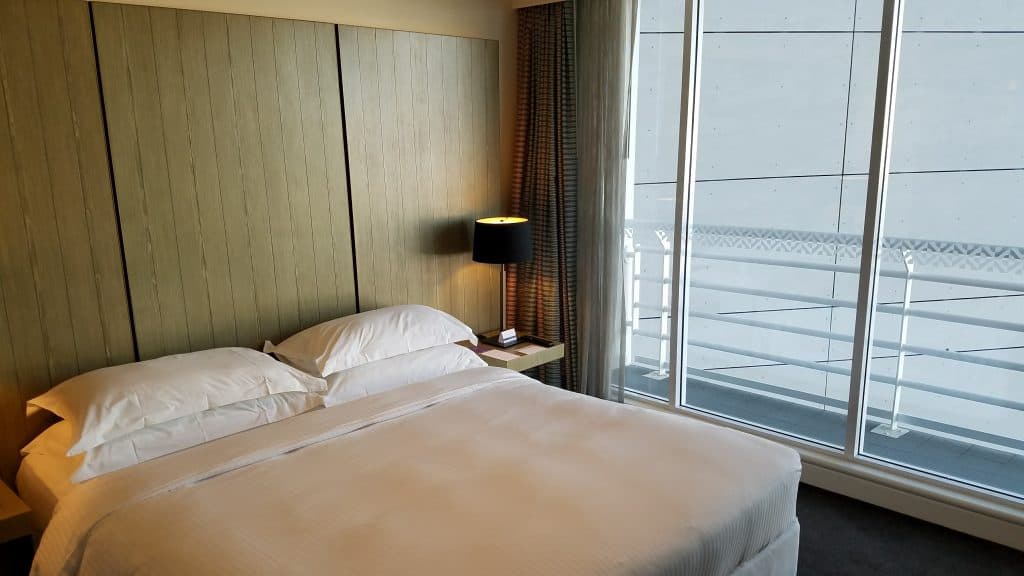 The curtains kept most light out except for some bleed around the edges.

Outside of the room was a balcony that ran the length of the living and bedroom.  It could be accessed via a sliding door in the living room.  There was no patio furniture but still a nice place to get some fresh air. 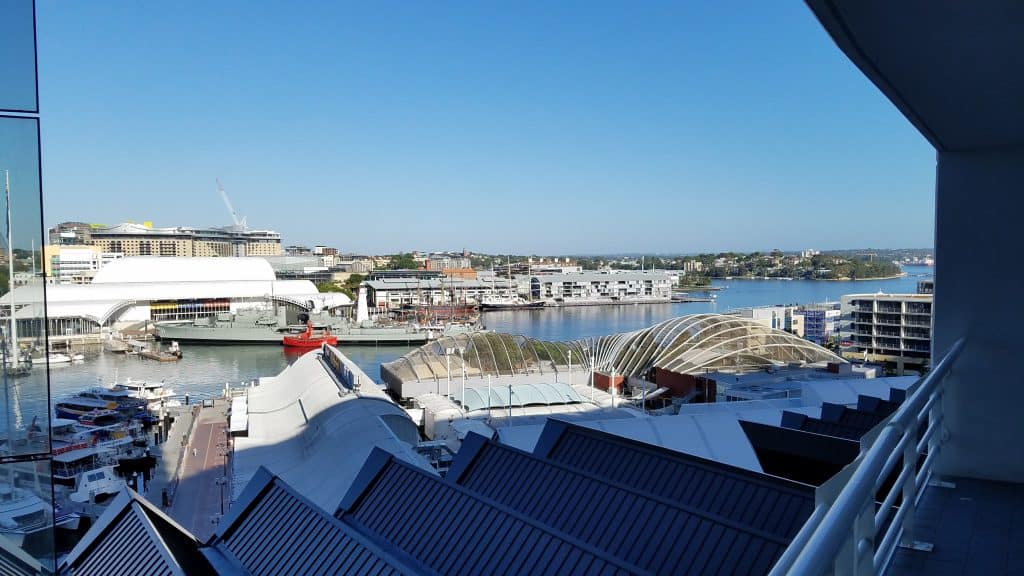 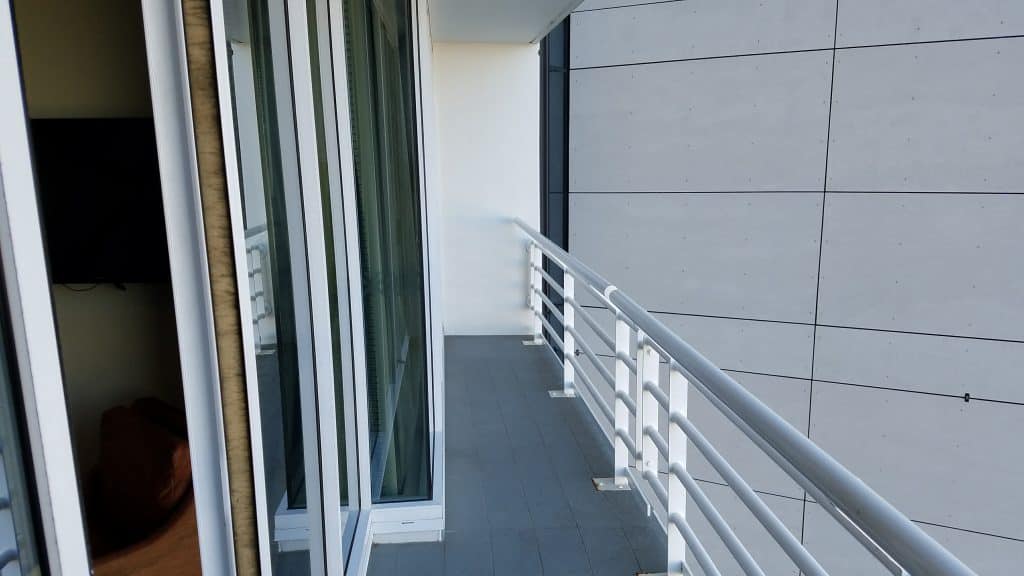 Bathroom: A short hall runs from the bedroom to the bathroom with large closets on one side. 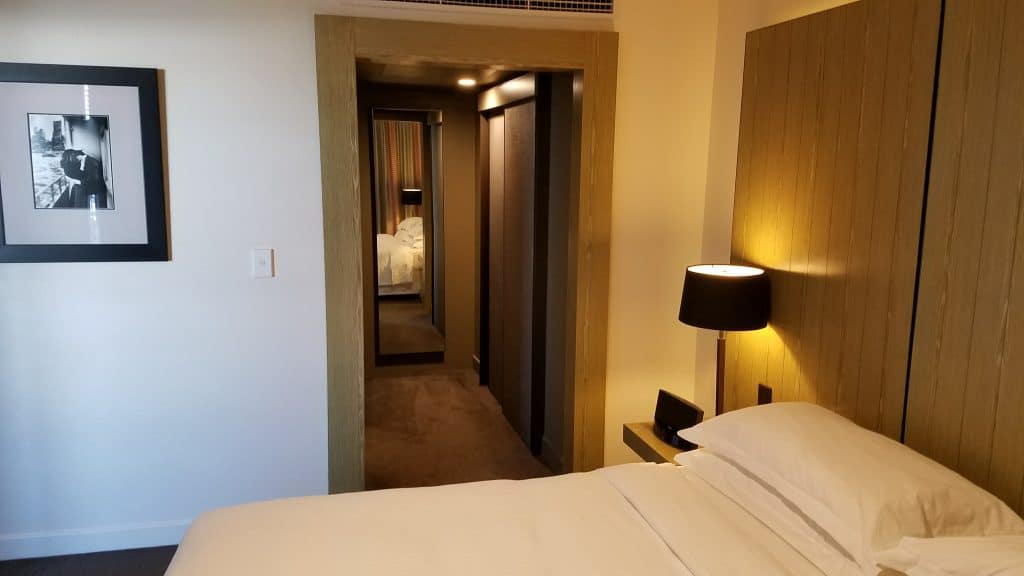 The bathroom itself was large and open.  The lighting was quite low; I imagine that it is trying to be modern but lacks function.  I like a bright bathroom personally.

The shower and tub were divided from the rest of the bathroom with a glass partition.  Robes were provided.  All the towels were new and thick. 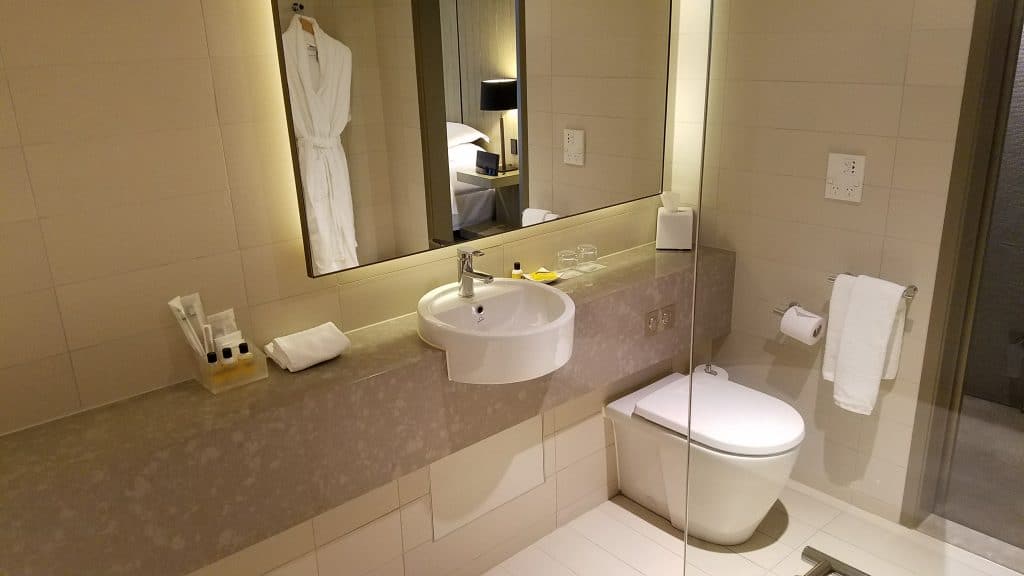 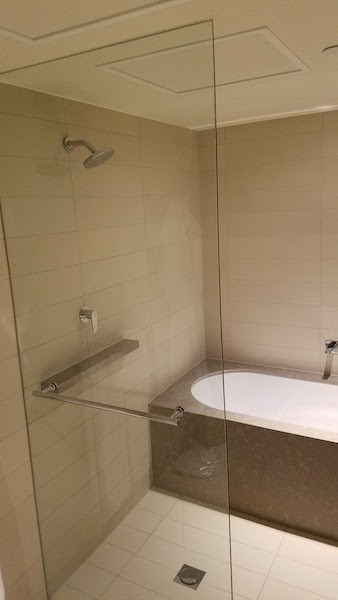 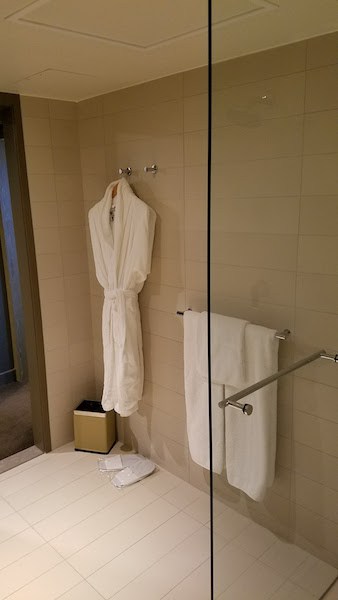 The toiletries were quite fragrant.  Every time I washed my hands I wanted to eat the soap.  They seemed like good quality, better than Kennet MD or June Jacobs (yuck).  I was surprised to see that the toothbrushes in the room were still branded with Four Points. 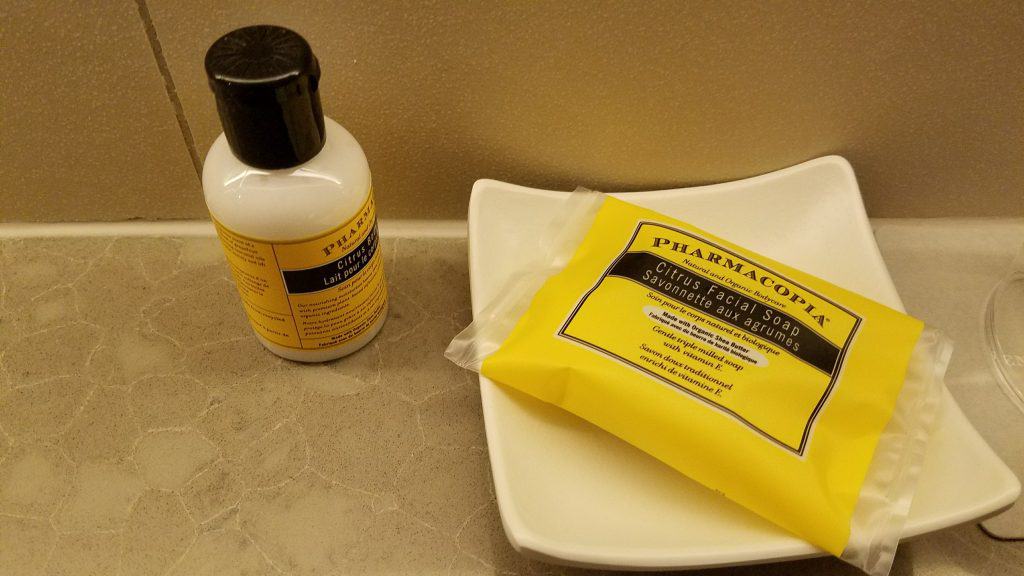 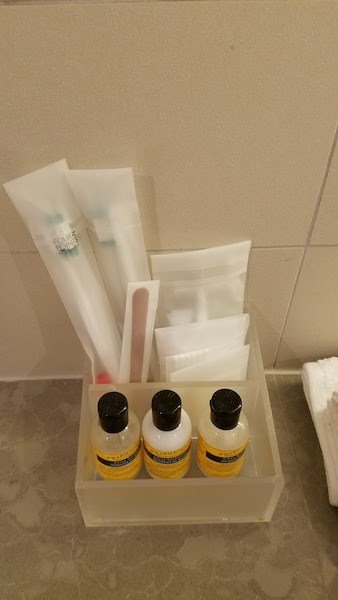 Amenities: The afternoon of my check in a bottle of white wine was delivered.  I had picked points for my welcome amenity, so I am guessing the wine was because I was in a suite. 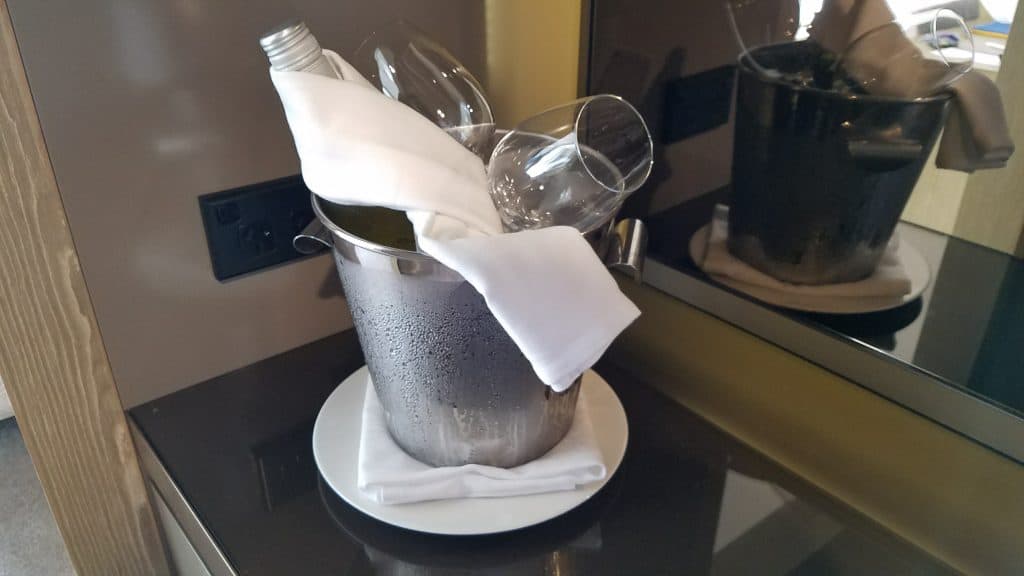 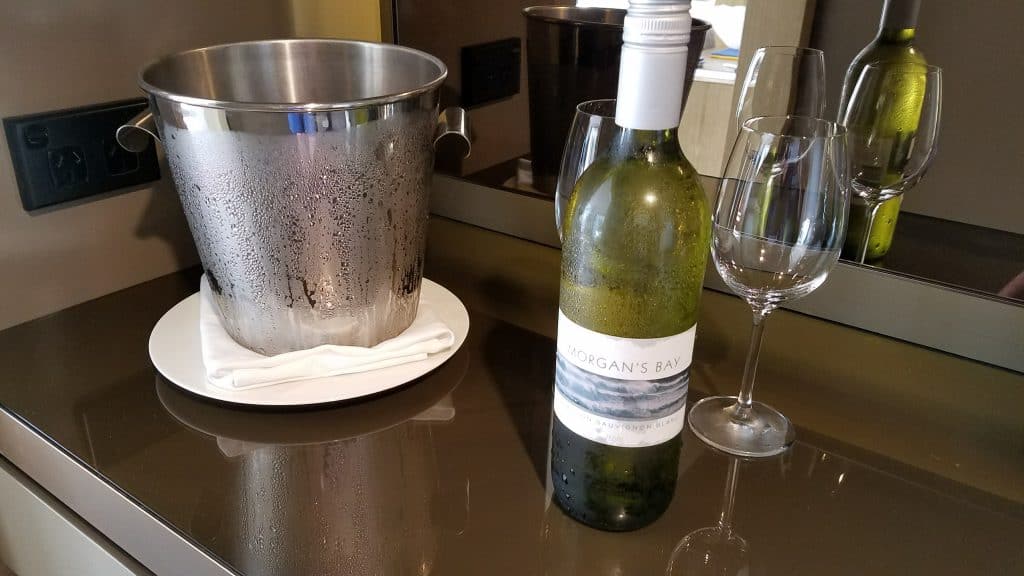 I called down to have laundry picked up but was told there would be a 100% surcharge as it was Boxing Day.  I decided to hold off.

There is no pool at the Hyatt Regency Sydney which seems a little short sighted.  I don’t believe there is one being built into the new tower, but I hope I am wrong.

There is a gym that provided basic work out options. 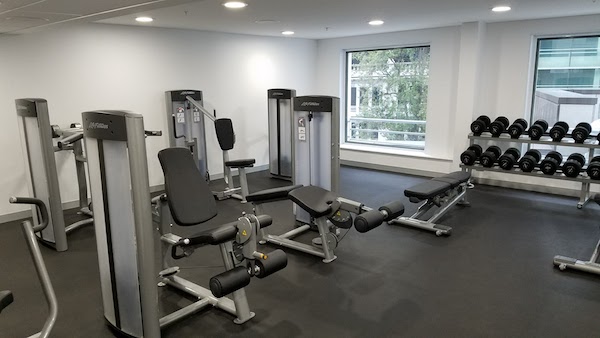 As the Regency Club at the Hyatt Regency Sydney was not yet open, I was provided breakfast in the restaurant as a Diamond.  It was quite a spread with four stations of cold food and one long buffet of hot food with probably 15 different western and asian options.  One could also order various egg dishes made to order. 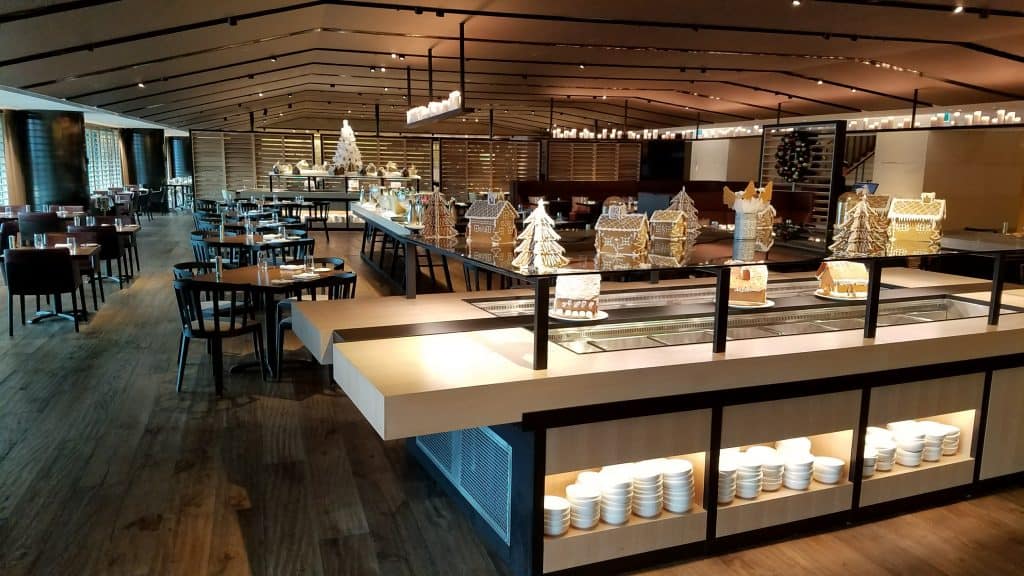 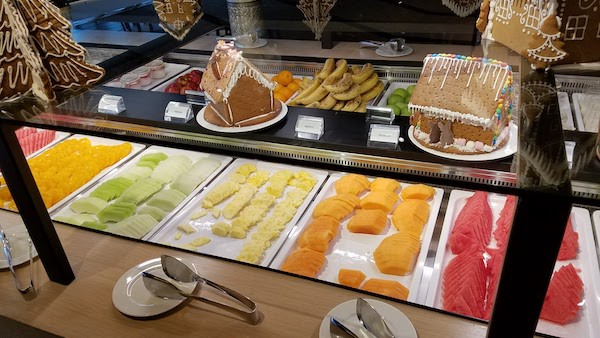 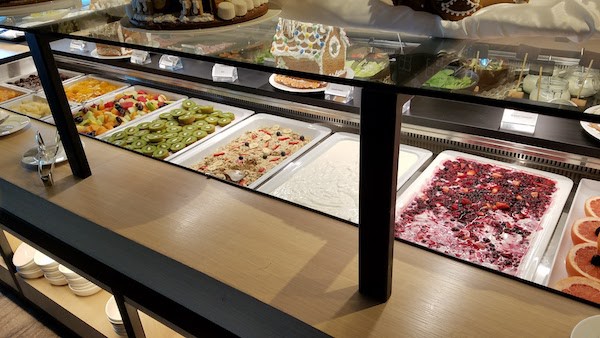 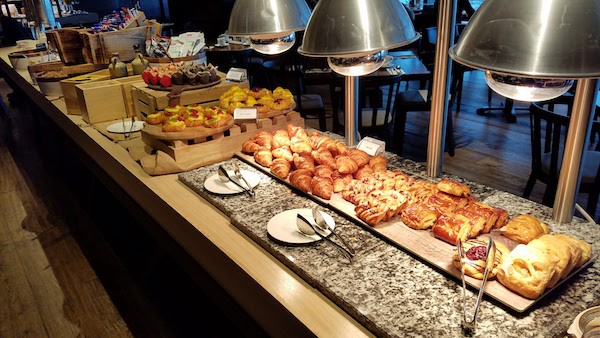 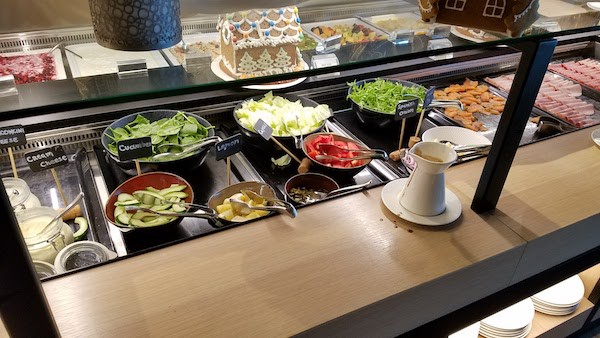 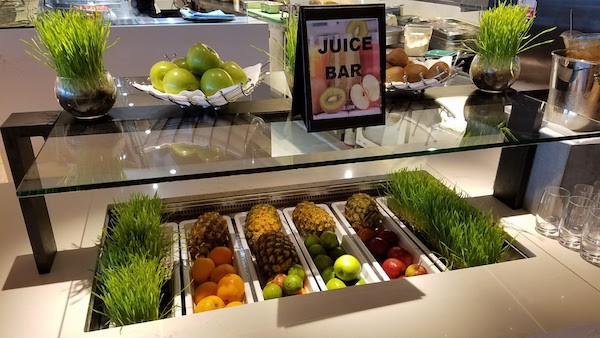 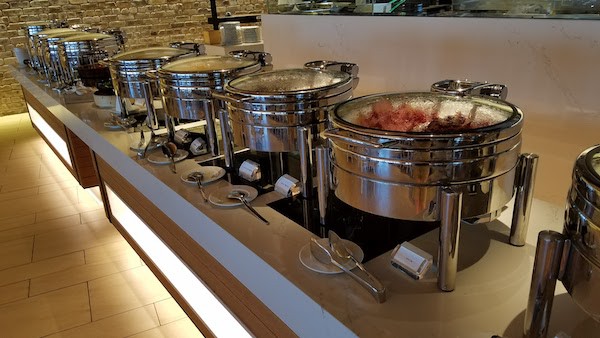 There was also a bar off the lobby however I did not try it out.  A bar on an upper floor is opening shortly which will provide great views of the harbour. 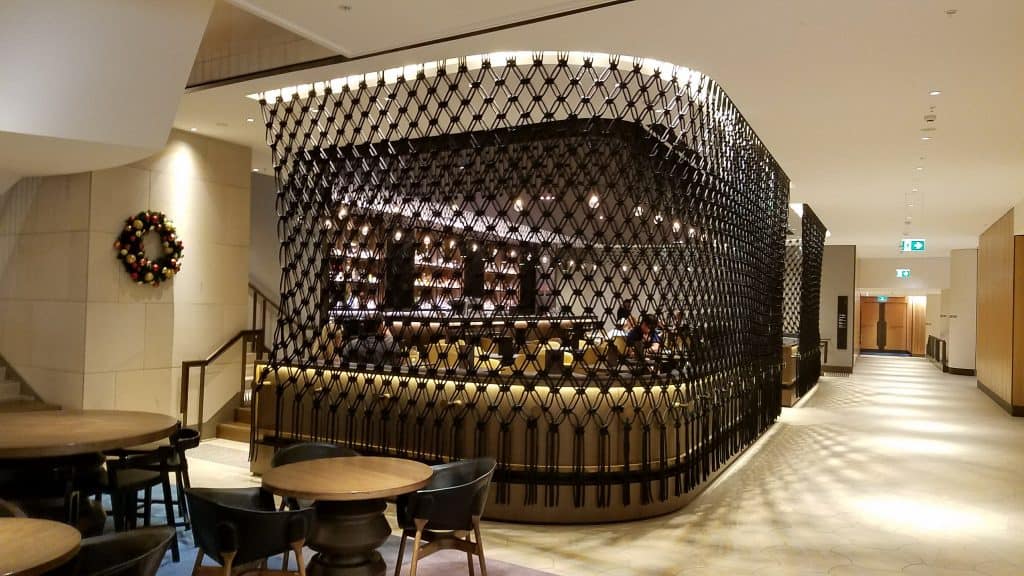 Service: Overall I was not impressed by the service.  Everyone was nice but it seemed there was a lack of training when the Hyatt Regency Sydney was rebranded.  I hope the service will improve as the transition finishes up and the new portions of the hotel open.  I did check my account and my welcome and club closure points posted at least.  I also asked for an email receipt when I checked out and never received it.

I also asked to tour the Regency Club the day it was opening.  They said that the club didn’t open to the public until 2:00 and I wouldn’t be able to view it until then.  One thing I have learned about Australians is they like to follow rules; no exception was made. 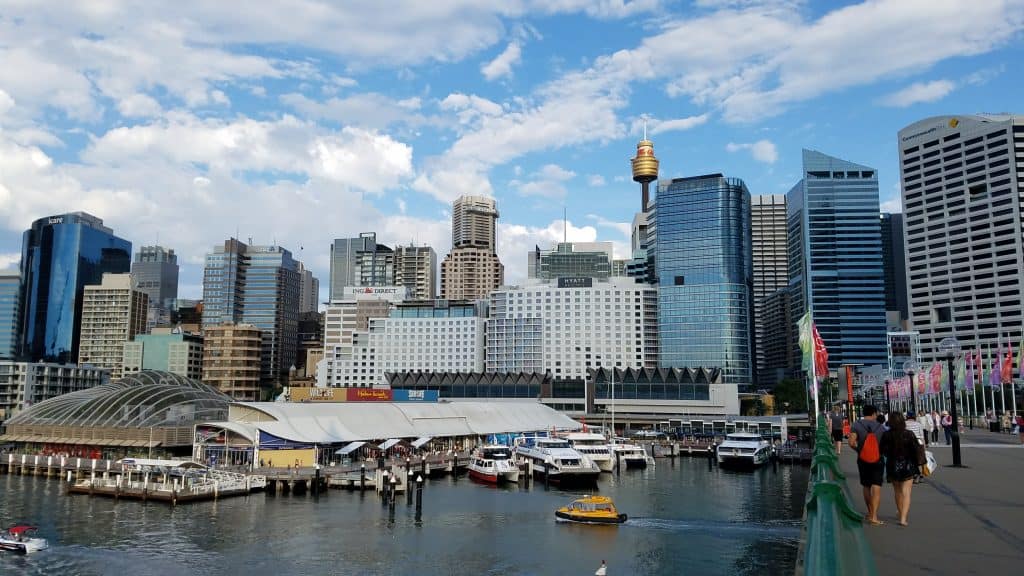 Overall: At 20,000 points per award night, I would not suggest booking a points stay.  For 10,000 more, you can book at the Park Hyatt Sydney and the experience is significantly better.  For cash, however, during my visit the hotel was 1/8th the cost of the Park Hyatt.  I paid 160 Australian dollars vs the Park Hyatt which was running for over 1,000.  Bottom line: For cash, the Hyatt Regency Sydney is a pretty good deal.  Not so much for points.

The Park Hyatt Sydney is just far and away a much better property so it is hard to be objective about the Regency.  Overall it is a decent business hotel or for families wanting to do the tourist things at Darling Harbour.  It is nice to have another Hyatt option in Sydney.