Three years ago I got a job a mile from my home and decided to sell  my car.  I live near downtown Seattle and rely on public transportation, walking, Uber/Lyft and car share.  It has been quite freeing.  And has made me get creative about getting around.  This weekend I took the Amtrak Cascades to Seattle as my alternative mode of transportation. 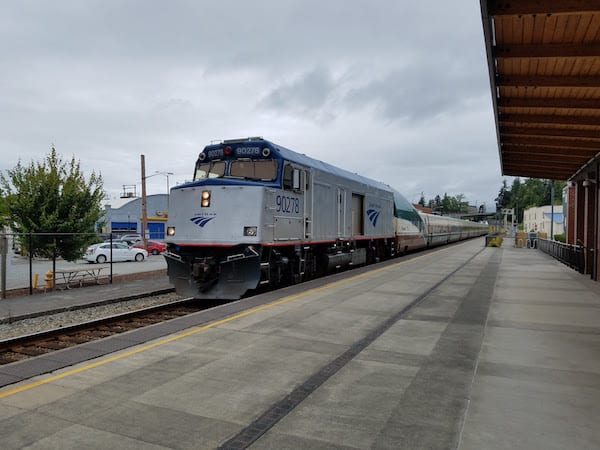 I have traveled by Amtrak in the past; including exploring the deep south of America for a college course.  But it’s been a few years.  This weekend I was up on the San Juan islands and needed a way home.  The Amtrak Cascades route (website) goes from Vancouver, BC to Eugene, OR with stops all along the way.

The Amtrak Cascades runs twice daily each direction between Vancouver and Seattle and 4x daily between Seattle and Portland.  This route isn’t as renowned as the LA to Seattle Coast Starlight but it is a nice service for travel in Washington and Oregon.  I purchased my “Flexible Economy” ticket for travel on the 4th of July three days in advance for $31 for a short, 1.5 hour trip.  For advance purchases it looks like tickets for this short leg can be found for well under $20.

I caught the Amtrak Cascades at Mount Vernon, a town about 60 miles north of Seattle.  They have a modern train station right off of I-5.  The train was about 30 minutes late arriving (probably due to the fact that it has to go through immigration at the US/Canada boarder). 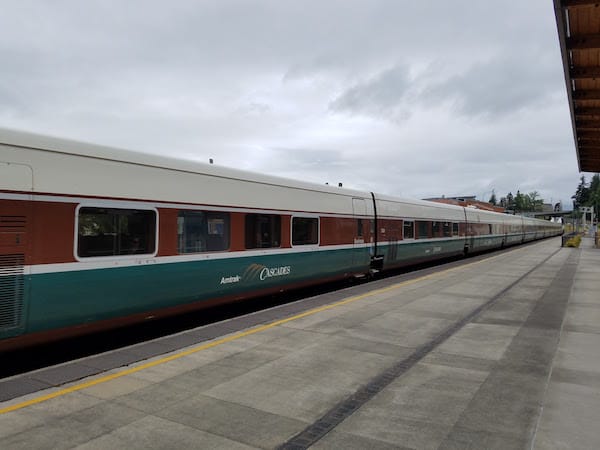 Each of the Economy Class cars on the Amtrak Cascades has 18-20 seats in a 1-2 configuration.  Traveling alone I sat down in the aisle/window seat.  The seats are plenty room (think First Class on a domestic flight). 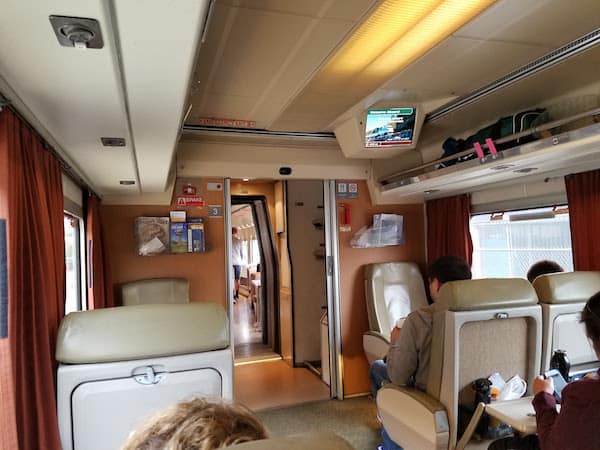 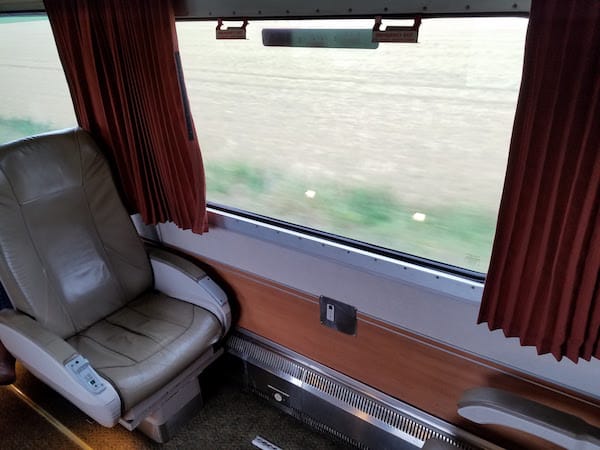 Each seat is reclinable.  A tray table is built into the seat in front of you.  There is a headphone jack although I didn’t try it out so not sure if it played music or was simply not used on this trip.  There is also standard power outlet at each seat.  There is plenty of overhead storage as well as luggage storage at the end of each car.

The bistro car had some snacks and drinks on sale and a few seats.  I was impressed that they had some local food (Ivars clam chowder, Tim’s Cascades potato chips).  They didn’t have alcohol on sale (yet) as I was on an early train. 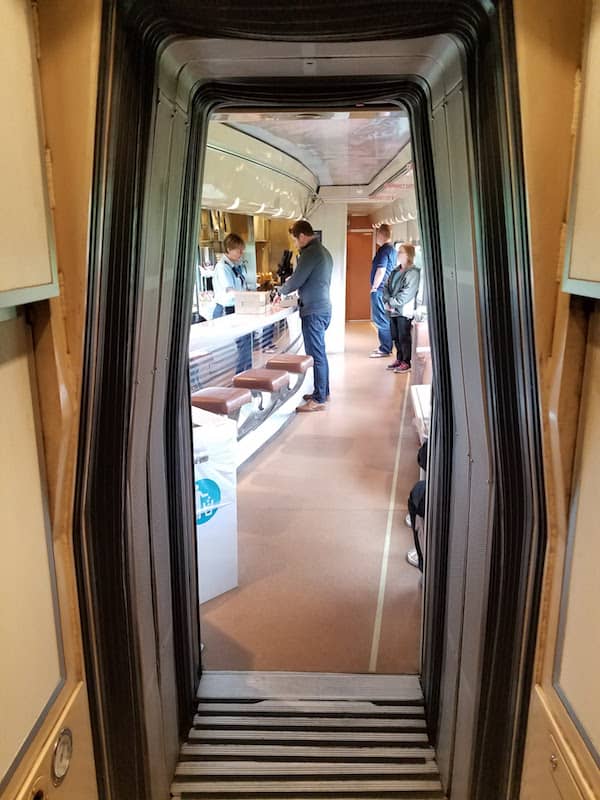 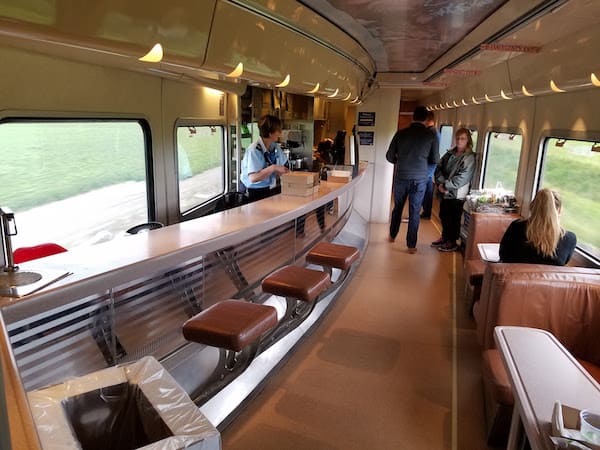 In front of the bistro car was the dining car.  The dining car on the Amtrak Cascades is basically a car with booths and tables (no meal service). 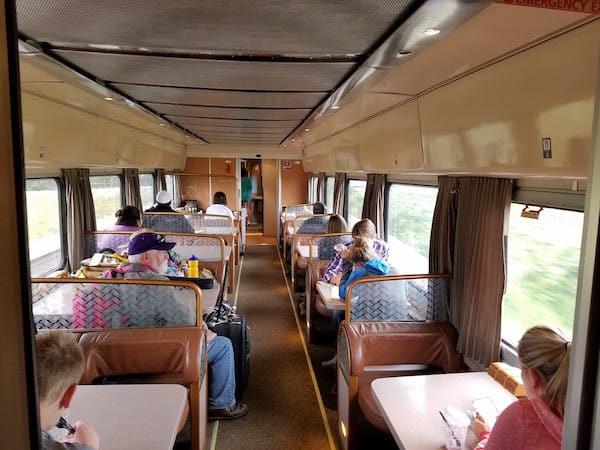 Overall it was a very quick and smooth ride.  I was impressed that at most stations we were only stopped for about 2-3 minutes.  At full speed we were hitting close to 70 mph which I found impressive; for some reason I figured that the Amtrak Cascades would top out at 50 mph or so.

There were some great views as the train went along the waters of the Puget Sound.  For a good portion the track is literally at the edge of the water.  I most enjoyed the portion entering Seattle.  Going across the Seattle Locks gave me a new perspective of the popular Seattle destination. 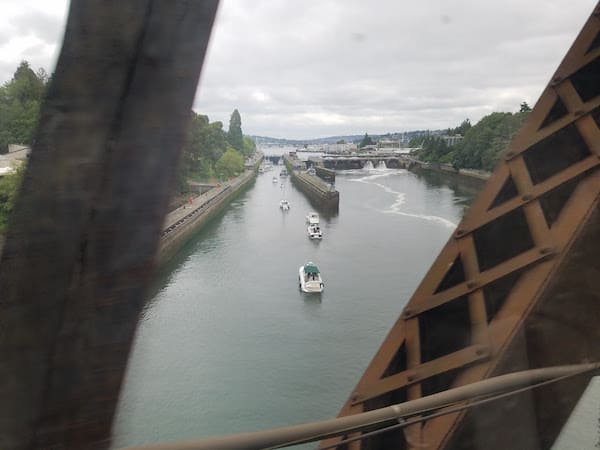 Seattle’s King Street Station has been renovated recently and restored to it’s original glory.  It is quite beautiful.  King Street Station is located in Pioneer Square and at the north entrance of Century Link Field where the Seahawks play.  From the station you can hop on the Link Light Rail to get around Seattle or hop on the First Hill Streetcar to head up to Capitol Hill. 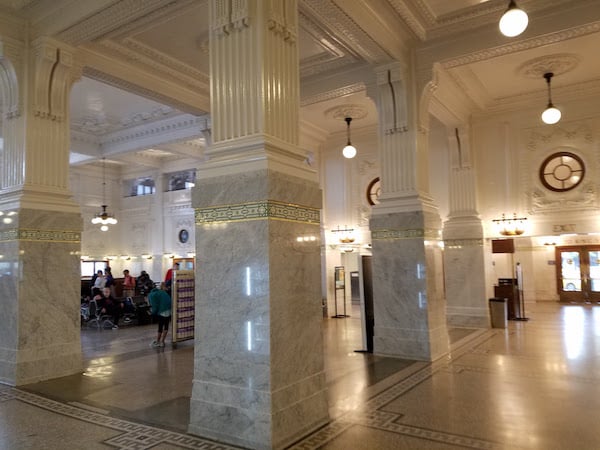 For my trip I also signed up for Amtrak Guest Rewards, Amtrak’s loyalty program.  I’ll probably never collect enough points for anything but I couldn’t not claim my points.

There is something romantic about traveling by train.  It is a much slower pace than air travel.  You don’t have to deal with crowds or security check points.  I like that the staff still walk up and down the cars, checking tickets, wearing their traditional train uniforms.  I may have to give train travel more of a chance.