As part of my cheap RT ticket to Hong Kong in Economy, I needed a hotel room for one night.  I had already stayed at the Hyatt Regency TST so I decided to try the Grand Hyatt Hong Kong which is located at the convention center.  Admittedly a one night stay is not enough to get a good feel for a property.  The reading I’ve done about the property is that it is fantastic; I found it to be nice but far from my favorite Hyatt. 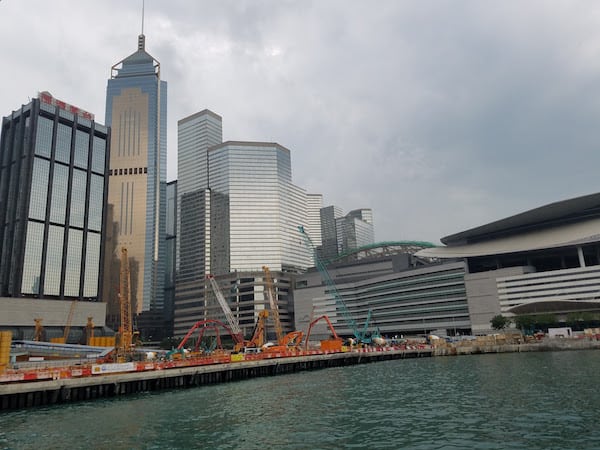 Location: The Grand Hyatt Hong Kong is located in the conference center complex (that includes at least one other hotel).  There is a lot of construction going on around the property, including the addition of a subway line that will make this property more desirable.  Currently there is not much right at the property; however a 10 minute walk can take you to the subway station (Wan Chai) and restaurants and shopping.  The two story Ding Ding trams run along Johnston Road which is also about a 10 minute walk from the hotel.

The Wan Chai Ferry Terminal is just east (again, a 10 minute walk) of the Grand Hyatt Hong Kong where you can catch a Star Ferry to Kowloon for about 4HKD.

We (I was traveling with a friend) arrived via the Airport Express that takes you to Hong Kong Central station.  A free shuttle (H2) takes you from the station to the hotel (it is the third stop on the shuttle).  Note that the shuttle drops you off at the conference center and the Grand Hyatt Hong Kong entrance is a bit hidden and you have a bit of a walk to the check in desk. 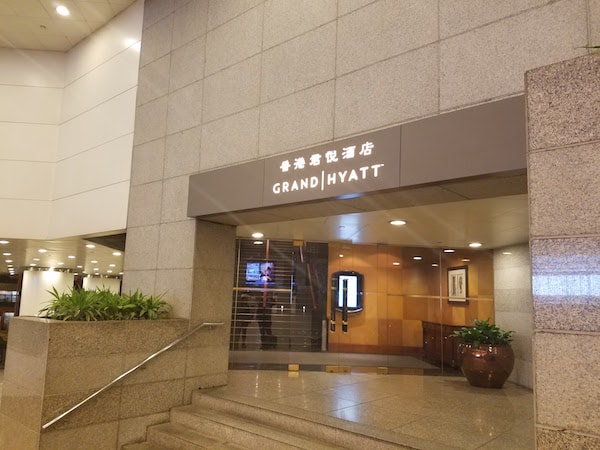 With that said, the property overlooks Victoria Harbour and Kowloon so there are some fantastic views to be had. 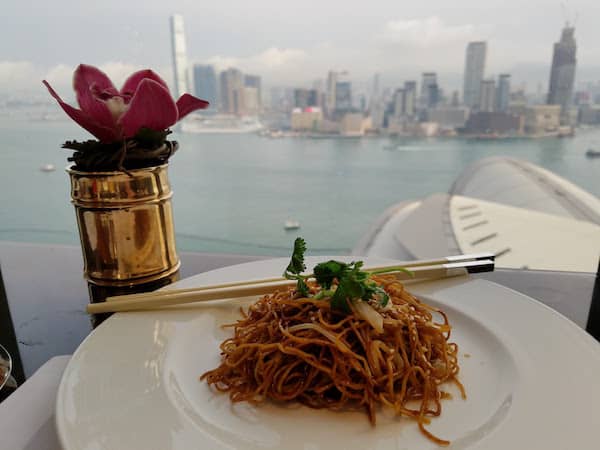 Check In: Once I found the reception desk I was immediately checked in by two friendly staff (one was a trainee who was doing a great job).  The veteran staff was very apologetic that we had been assigned a King room instead of two twin beds as I had reserved and had confirmed.  The options we were given was to have a rollaway brought in or to wait about 30 minutes to have them separate the king bed in to two twins.  As we were pretty exhausted we opted for the rollaway so we could settle in.  We were assigned room 2622 which was a Harbour View room since I am a Hyatt Diamond member. 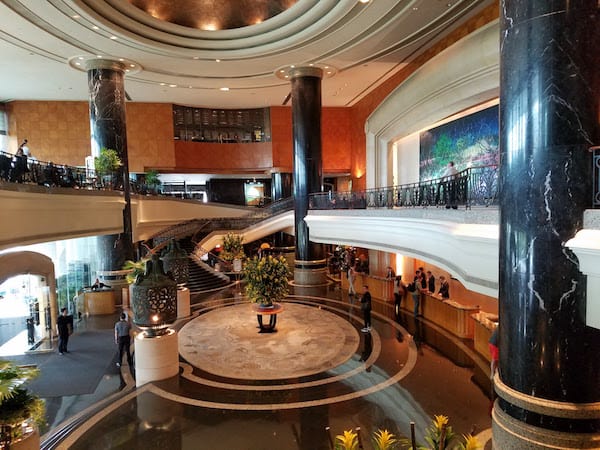 The trainee then took us up to our room where the rollaway was being set up.

The Room: The hotel is still under renovation; my understanding is many of the suites are being worked on.  Our room had recently been updated and it was well done although small (made extra small with the rollaway at the foot of the bed.  Large windows with blackout shades looked out towards the Harbour and Kowloon.  A small breakfast table with two chairs was in one corner and a chair in the other. 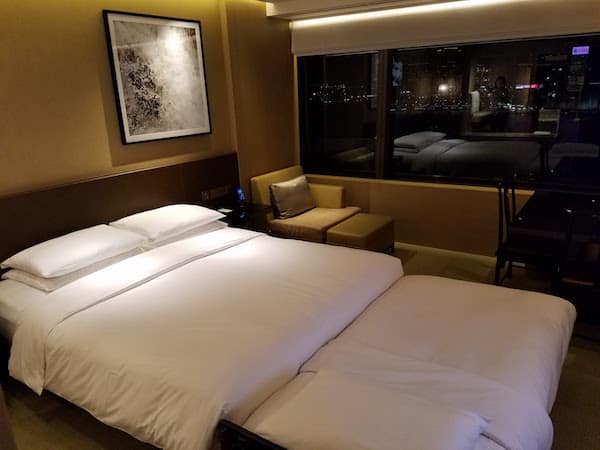 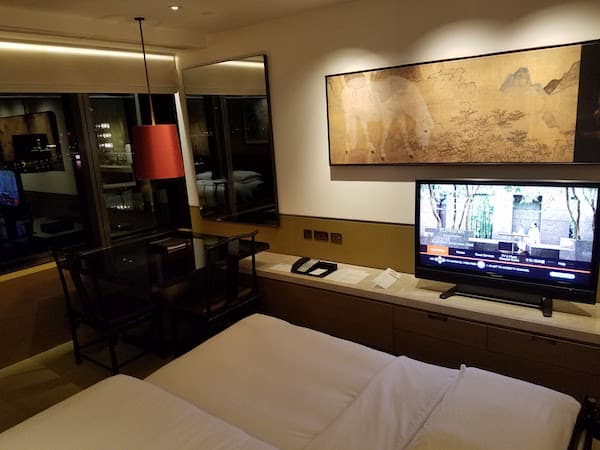 There was plenty of storage in the “hall” between the door and the bedroom.  Since we were on the 26th floor (not a Club floor), our room may have been slightly smaller than a Club room.

Between the bathroom and the rest of the room was a large cutout in the wall with a curtain that could be lowered for privacy. 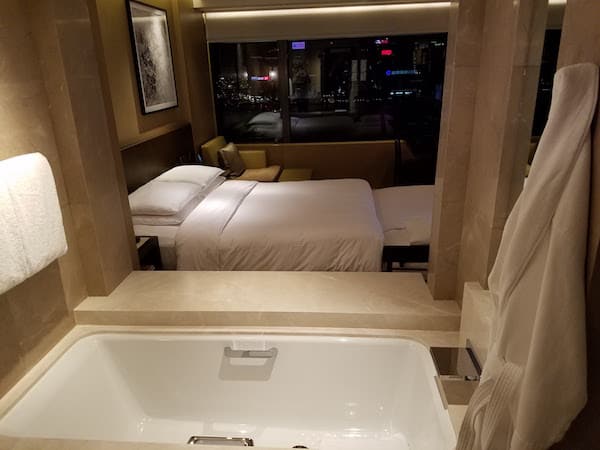 The room also had the Handy smart phone that could be borrowed for the duration of your stay.  My friend used it to call home in the US and she thought it was pretty great.

The Bathroom: A sliding door divides the bathroom from the hall.  The toilet is in a separate space with a solid door next to a sizable shower with both rain shower head and hand held shower head.  Single vanity with plenty of counter space.  Nice bath products including a drawer of “extras” like a hairband, nail file, comb and toothbrush/toothpaste.  Under the passthrough to the bedroom was a large soaking tub. 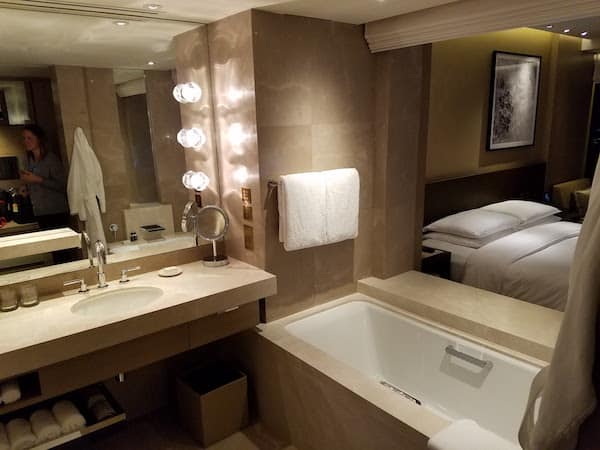 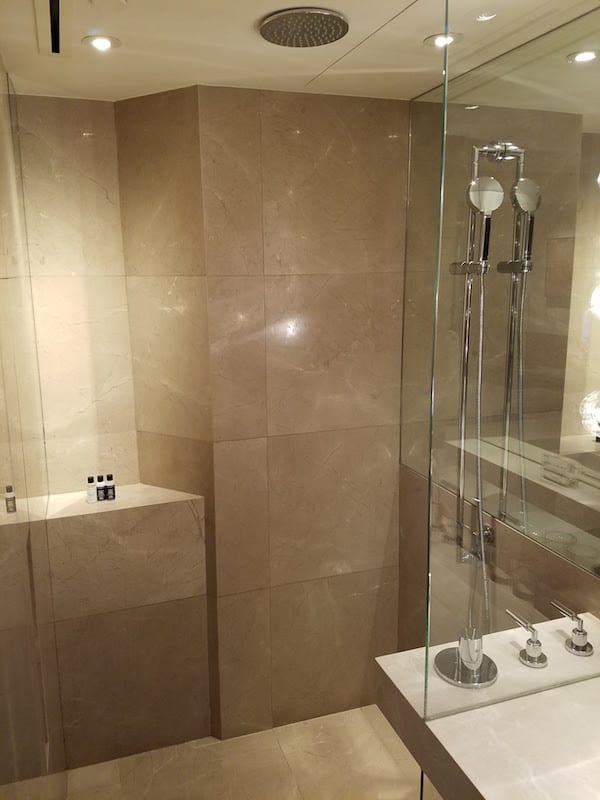 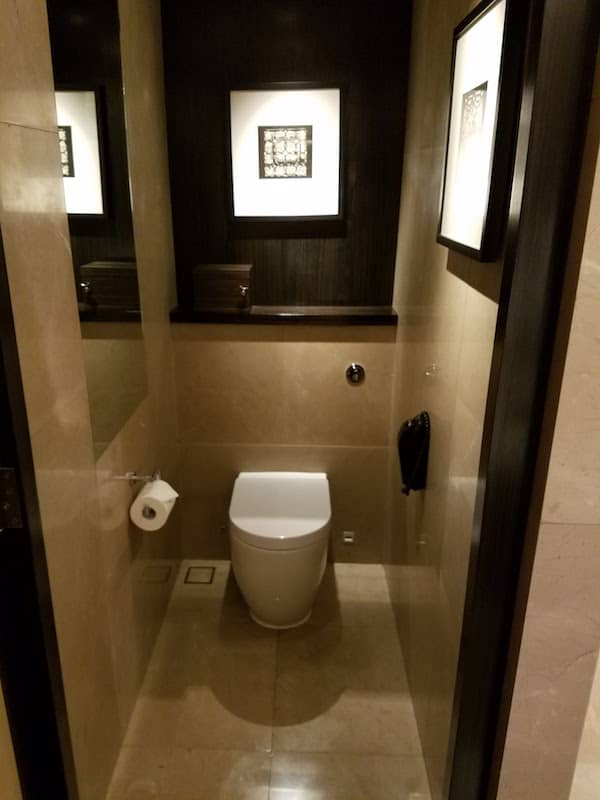 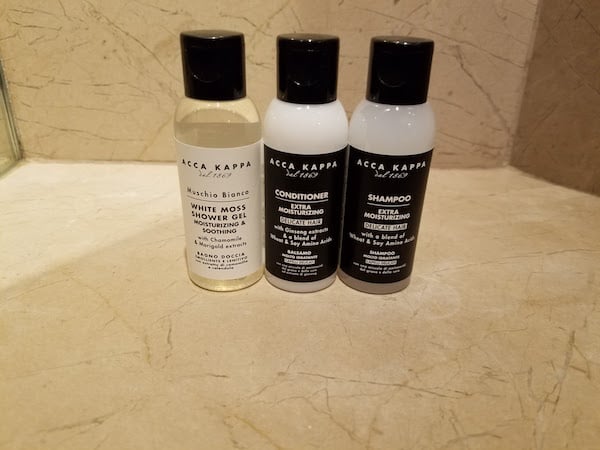 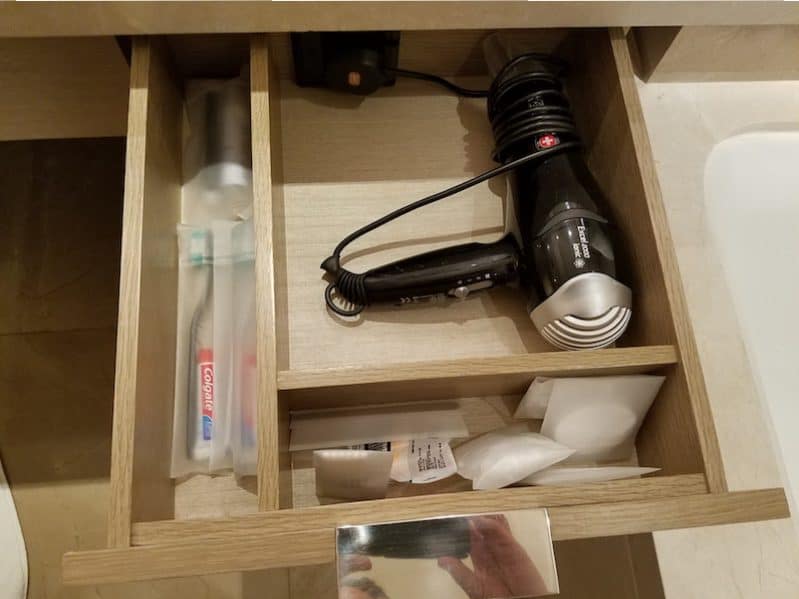 I’ve heard it said that the Grand Club at the Grand Hyatt Hong Kong is one of the best in the world.  It is a beautiful, freshly renovated space.  The first floor of the lounge has the concierge and a small seating area.  The large staircase takes you to the main part of the lounge which looks like a nice restaurant.  There is floor to ceiling windows that look out onto the Harbour.  The food/drink area is in the middle and there is a more intimate seating area behind the buffet as well as one to the side. 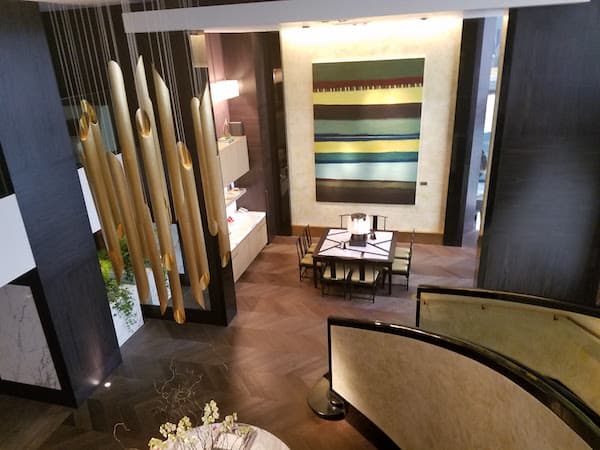 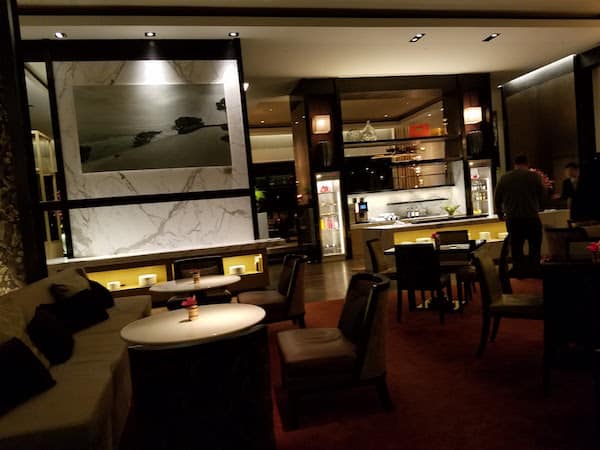 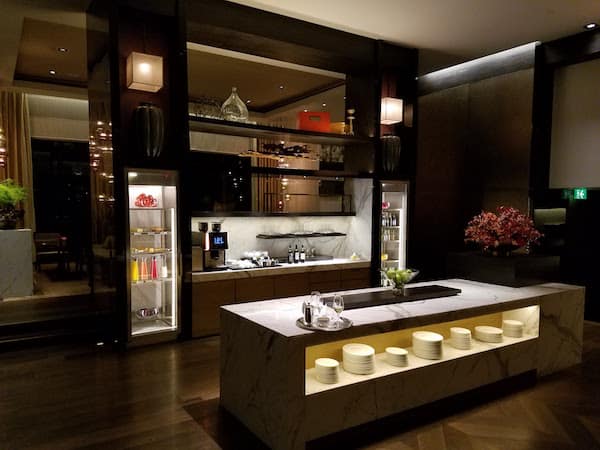 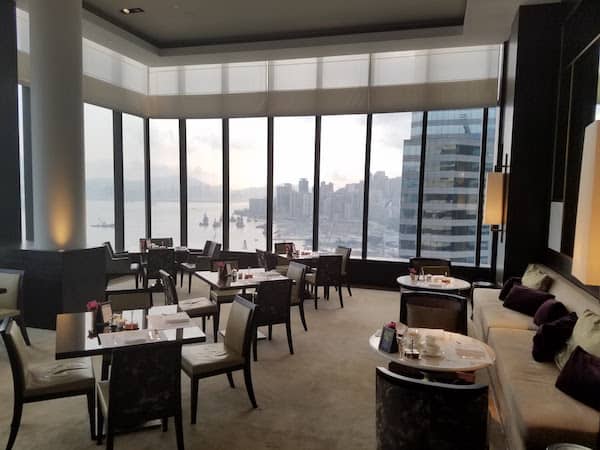 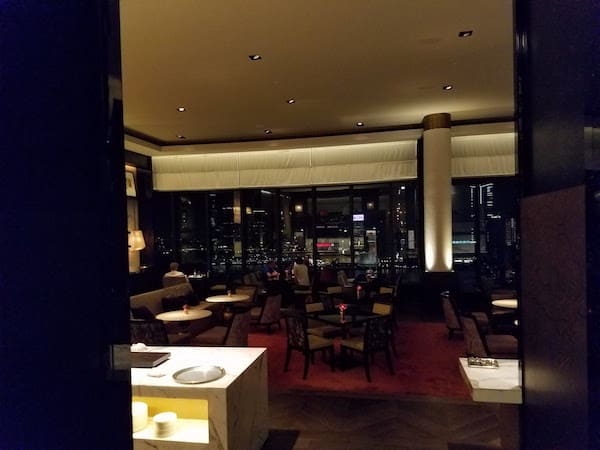 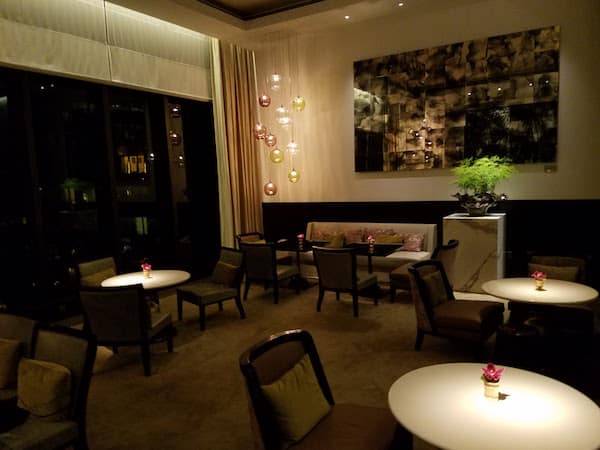 We arrived to late to enjoy the happy hour but there was wine, beer, drinks and dessert served until the club closed at midnight.

The next morning we decided to eat breakfast in the Club instead of Tiffin which is on the Mezzanine floor of the hotel overlooking the lobby.  While my understanding is that Tiffin has more options, the view from the Club won us over for our morning.

There were several hot buffet dishes (both Chinese and American) as well as standard pastries, fruit, cereal bar, etc.  In addition, there were a few non-menu hot items that were available to order.  Unfortunately there is no way to know this; the only way I realized it is because I saw someone eating something that was not from the buffet. 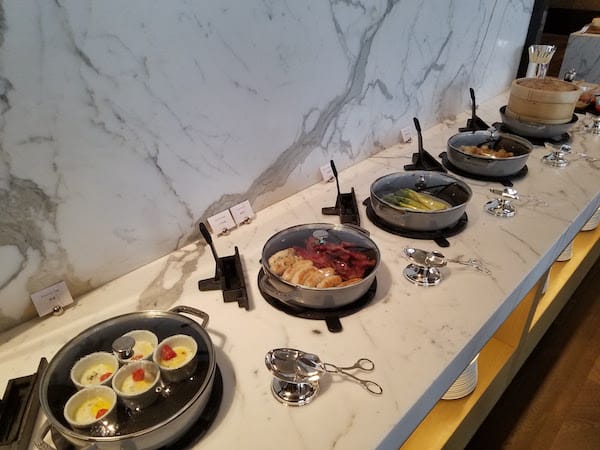 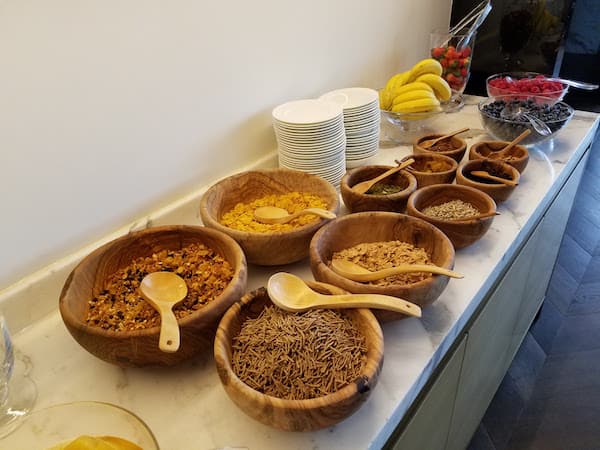 Pool: As we were there for such a short stay I didn’t get a chance to use the pool but it did look like a nice area to spend some time.  Again, great views.  A nice tree line courtyard took you to the large pool area complete with waterfall feature. 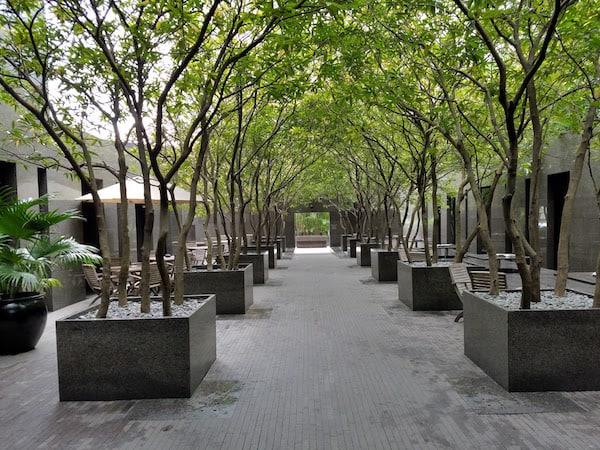 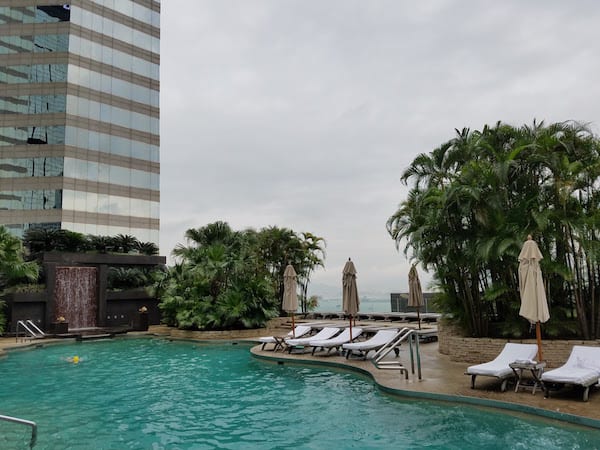 The gym and spa are also located on the same floor as the pool and looked very nice.

Service: While the staff was friendly, there were a few small hiccups: wrong newspaper in the morning, wrong bed type, no mention of the additional hot breakfast items in the Club.  Perhaps had my stay been longer I would have had more positive interactions that would have overshadowed the mistakes.

Overall: Both the Grand Hyatt Hong Kong and Hyatt Regency TST are nice properties and good options for staying in Hong Kong.  If I was to return to Hong Kong and was wanting to pick a Hyatt; I would probably stay at whichever property was cheaper.  If the price was the same, I would chose the Category 4 Hyatt Regency TST over the Category 6 Grand Hyatt Hong Kong.  That definitely tells you something.

My biggest complaint about the Grand Hyatt Hong Kong has to be the location.  Kowloon is just so much more vibrant than Hong Kong proper, especially around the convention center.

For me the Grand Hyatt Hong Kong was a good property but didn’t live up to the expectations that I had for the hotel.