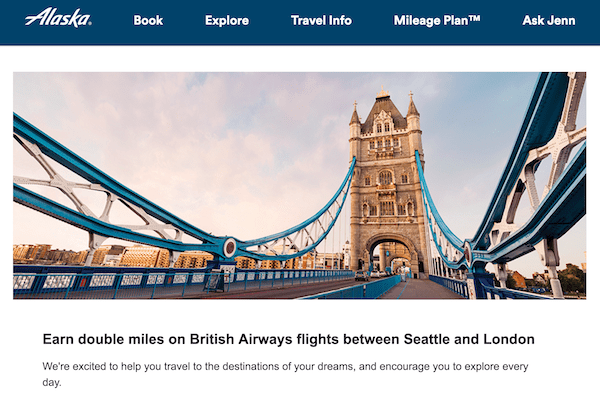 Alaska Airlines is running a promotion where you can earn double miles SEA-LHR when you fly on British Airways and credit the miles to your Alaska Mileage Plan account.

All you have to do is register online before your first flight and then fly direct from Seattle to London on British metal.  The dates of the promotion are listed on one page as April 1-June 15 but on another page as April 1-September 30.  I reached out to Alaska representatives and they are looking in to the correct date.  UPDATE: The website has been updated, the correct date is September 30 (yay!)

Note that the bonus miles earned double miles SEA-LHR are redeemable miles, not elite qualifying miles.  This means they will not count towards your MVP status but can be redeemed for future tickets.  With the hullabaloo about the change in redemption value of Alaska Miles, this may not be as attractive to some.

Also during the promotional period, Alaska Airlines MVP Gold and Gold 75k members will also get some bonus perks with British Airways:

It isn’t clear if you need to have a physical copy of your Mileage Plan card or if your boarding pass is automatically coded for this benefit.

It would be nice to see this benefit continue.  Alaska Airlines is not part of OneWorld (the airline alliance that British is part of) so typically status with Alaska doesn’t get you any benefits on BA.

Full terms and conditions of the Double Miles SEA-LHR promotion:

Mileage Plan members who register for this promotion before their first qualifying flight will receive double miles on nonstop British Airways flights between Seattle (SEA) and London-Heathrow (LHR), for travel from April 1, 2016, through September 30, 2016. Mileage for qualifying flights must be credited to the member’s Mileage Plan account. Flights must be marketed and operated by British Airways. Not valid on free or award travel. Double miles do not count towards Mileage Plan elite status. Double miles will be awarded within four to six weeks of meeting the promotion’s qualifications. All terms and conditions of the Mileage Plan program apply. Offer subject to change without notice.