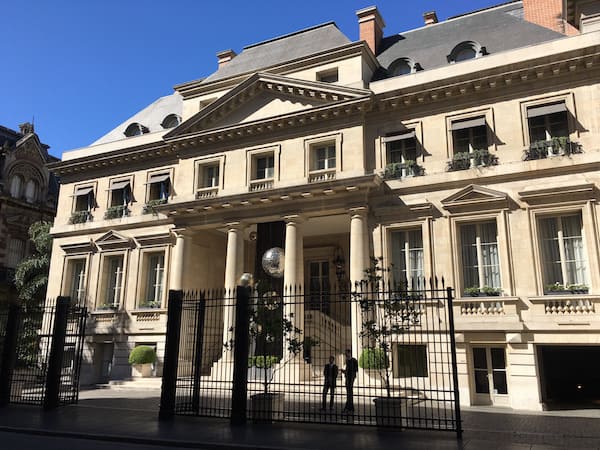 There is only one Hyatt property in Buenos Aires, but it is a beautiful one.  Palacio Duhau Park Hyatt Buenos Aires is in an old palace (once belonged to the Duhau family) in the tony Recoleta neighborhood.  For reference, Evita is buried a few blocks away.  The location and property come at a high price; for my trip over Christmas the lowest price I could find was $550 a night with no point redeemable nights — and that was 6 months out.

Knowing I would be in Argentina and that I wanted too stay at the Park Hyatt Buenos Aires, I called Hyatt Gold Passport.  They were able to work with the hotel to open up award nights.  I used my two Chase Hyatt Visa nights and for the third night I used Points + Cash.  It is insane that the property is a Category 5 (meaning it is 20,000 points per night).  Probably should have just paid the 20,000 points, but when I booked I think there was a reason (maybe they wouldn’t open up straight points nights for Christmas).  Anyway, I have no regrets about using my free nights at the property.

The property itself is actually two buildings; the palace side that only has 28 rooms and the modern tower that has 100+ rooms.  The palace is mostly (all?) suites.  I would have liked to stay in the palace but suite upgrades aren’t good for award nights.  In between the two buildings is a large courtyard with fantastic landscaping.  The grounds and the buildings are all very tastefully done. 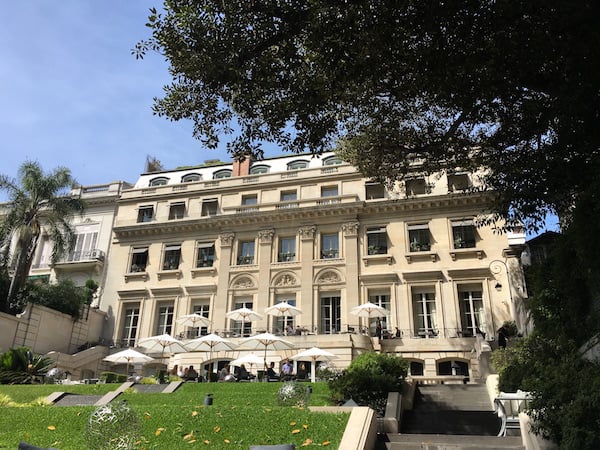 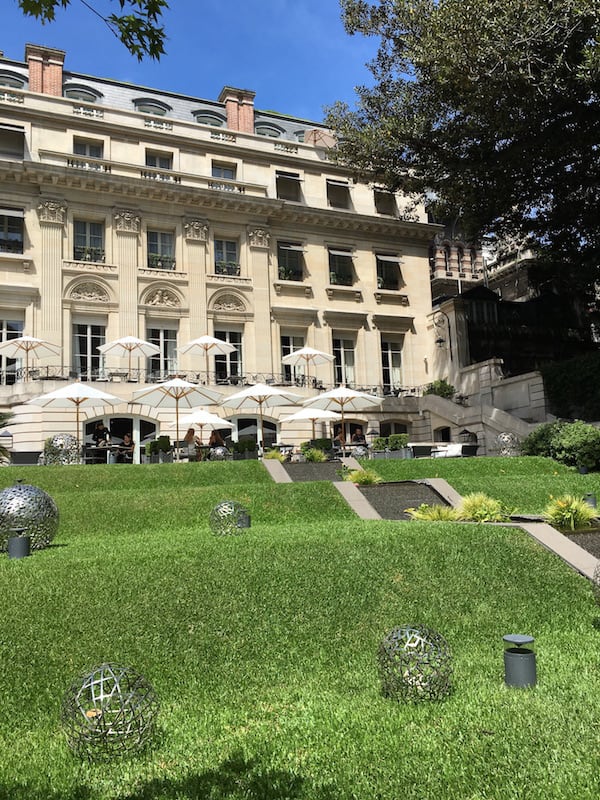 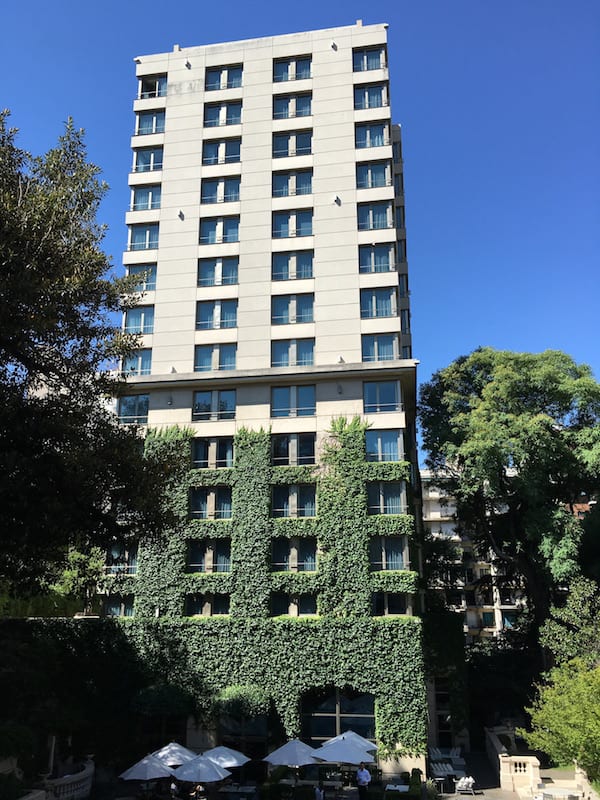 There are at least three restaurants on site.  Two in the palace, one in the modern building.  Breakfast (free for Diamond status members) is a buffet; you can dine either in the palace or modern tower; both have the same offerings.  As this is a Park Hyatt there is no Club for Diamond members.  Recoleta has very upscale dining, I found myself eating at the property’s more casual restaurant for lunch or dinner.  Sitting on the balcony of the old palace overlooking the beautiful grounds; even if there was better food elsewhere I found the setting to be spectacular.

Under the courtyard is a tunnel that connects the two buildings.  In the tunnel is an art gallery.  Yes, the hotel has it’s own art gallery. 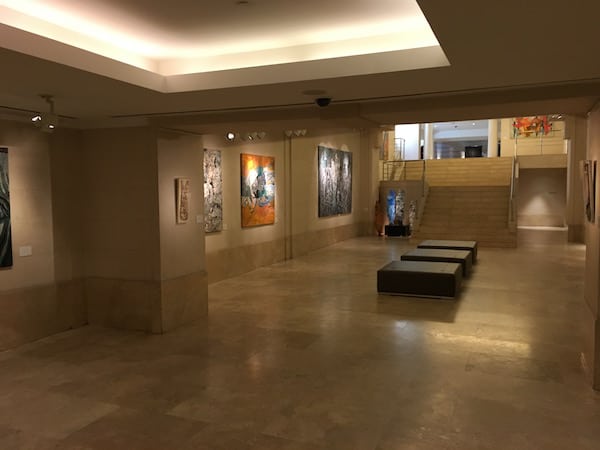 Check In: The experience with the hotel actually started before I arrived.  I flew in to Buenos Aires on Christmas Eve; landing around 1o:00pm.  Apparently taxis stop running at 9:00pm on Christmas Eve, so I was stuck at the airport.  A frantic call to the hotel and the manager on duty was able to arrange a car to pick me up on the spot.  It was extremely helpful (and expensive) but set the tone of how great the service was at the property.

Check in went smooth and they had my room all ready for me.  The manager that helped me on the phone came out to introduce herself.  Then a third staff showed me to my room including a thorough tour.   When we first entered the room fireworks were going off outside.  The staff explained that at Midnight on Christmas the city erupts in fireworks.  A great introduction to my room and the city.

The Room: My room at the Park Hyatt Buenos Aires was on the 14th floor of the modern tower.  The top floor is 17 so I had a high floor (which I am guessing was my Diamond member upgrade) with a nice city view.

The room was not as fancy as some hotels (I thought the room at the Park Hyatt Beijing was nicer) but definitely was comfortable and plenty of amenities.

The bed was very comfortable and the temperature controls were very sensitive (in a good way) so you could sleep just right.  There was a TV but I have to say the only time it was on was after evening turn down service; I never watched anything on it besides the Park Hyatt channel.

There was a large desk with two chairs in addition to a comfortable lounge chair.  A nook off the main room held a minibar (not included) and tea/coffee maker.  Water and tea was provided daily (and refreshed at turn down).  There was also a bowl of oranges, apples at the bedside, and I was provided a bottle of wine my first night as welcome amenity even though I took the points.  As it was Christmas, chocolate covered almonds were also provided the first evening. 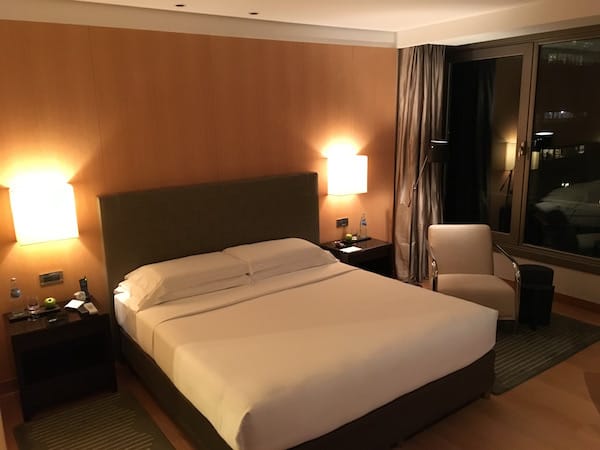 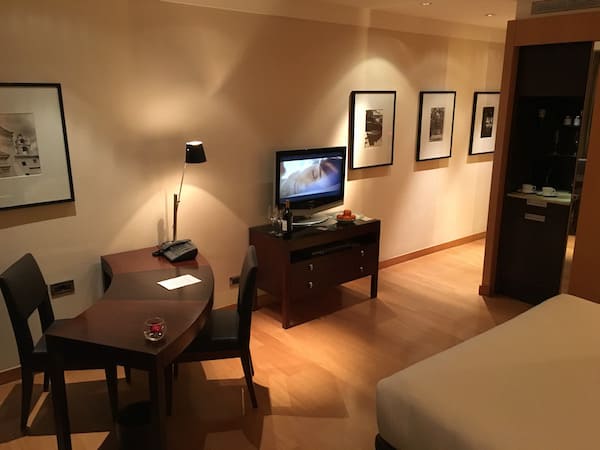 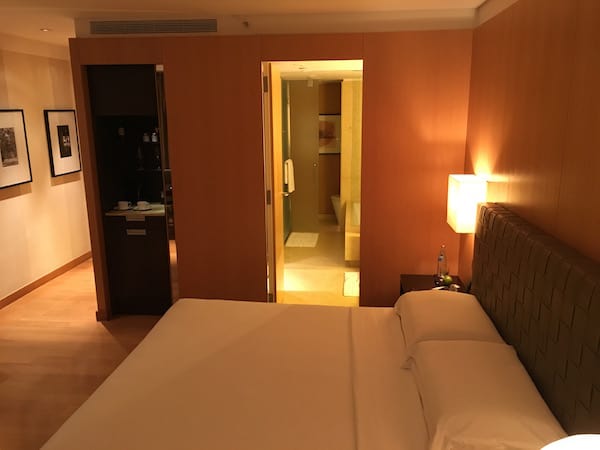 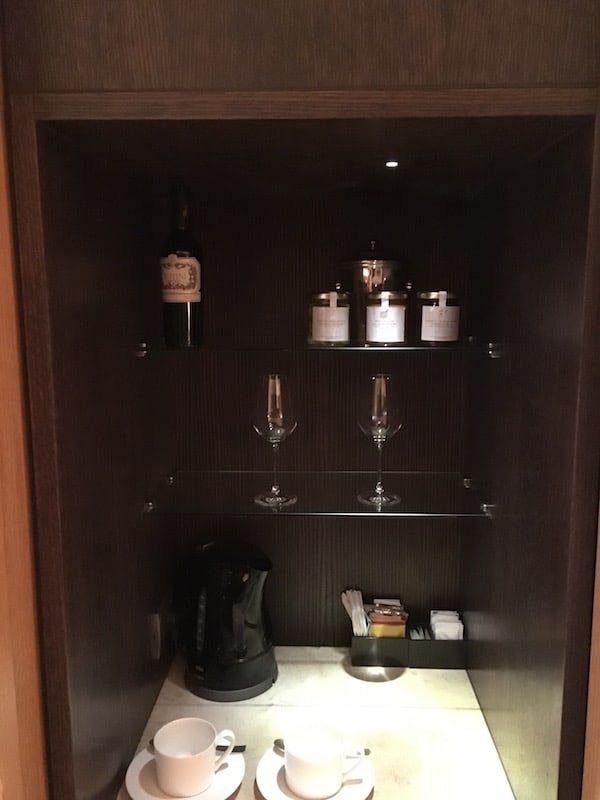 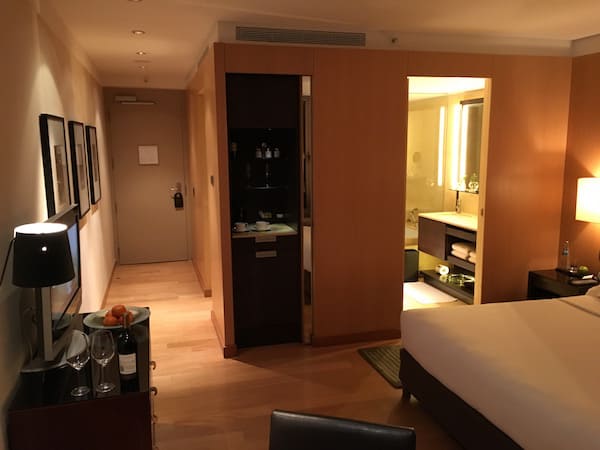 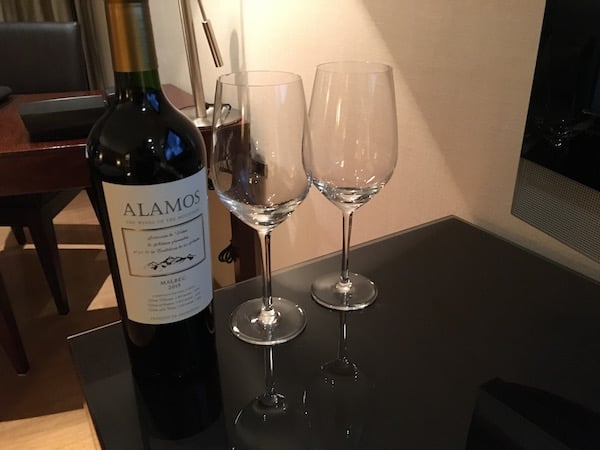 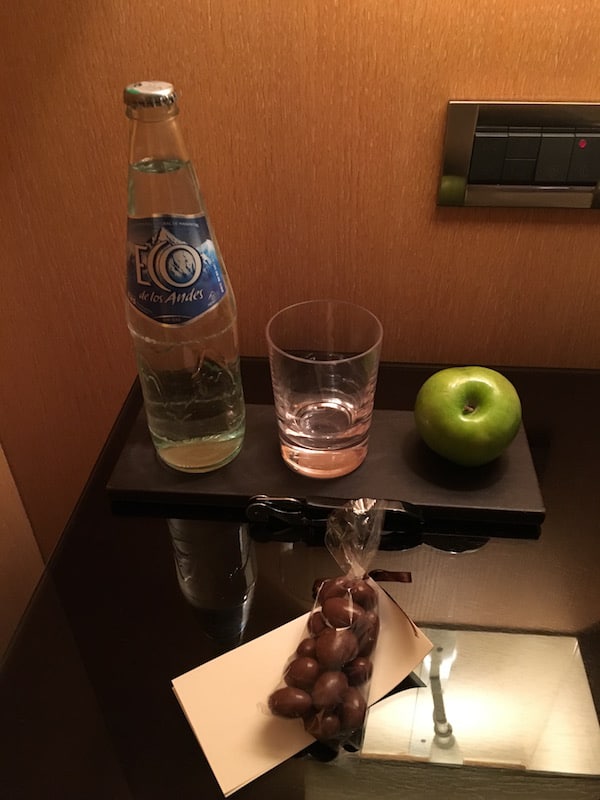 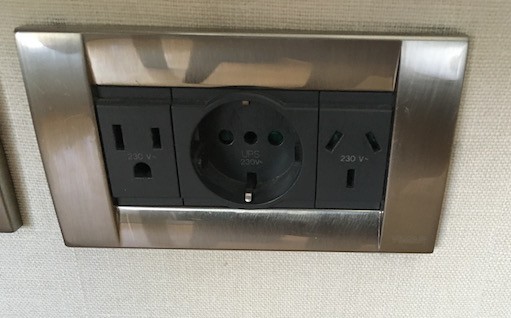 Bathroom: The bathroom has two entrances; one next to the room door/entrance and another next to the bed.  There was a walk-through closet with a safe. 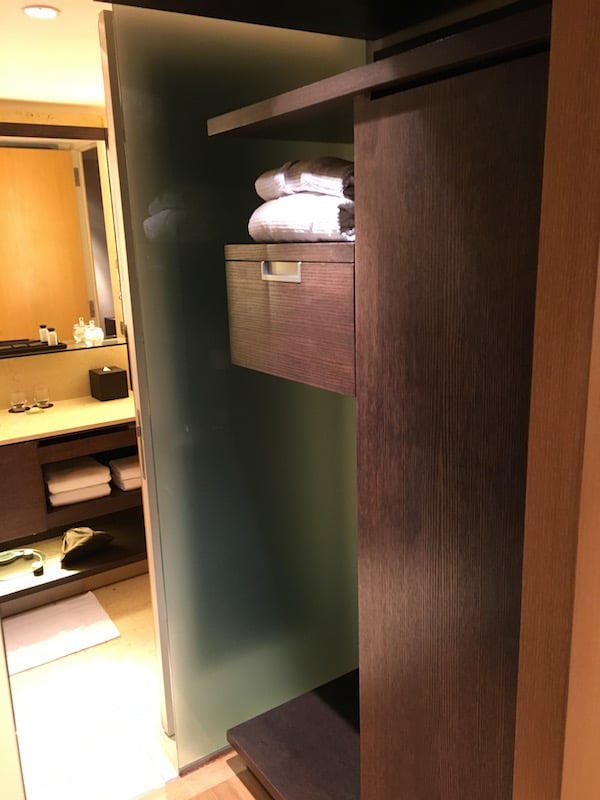 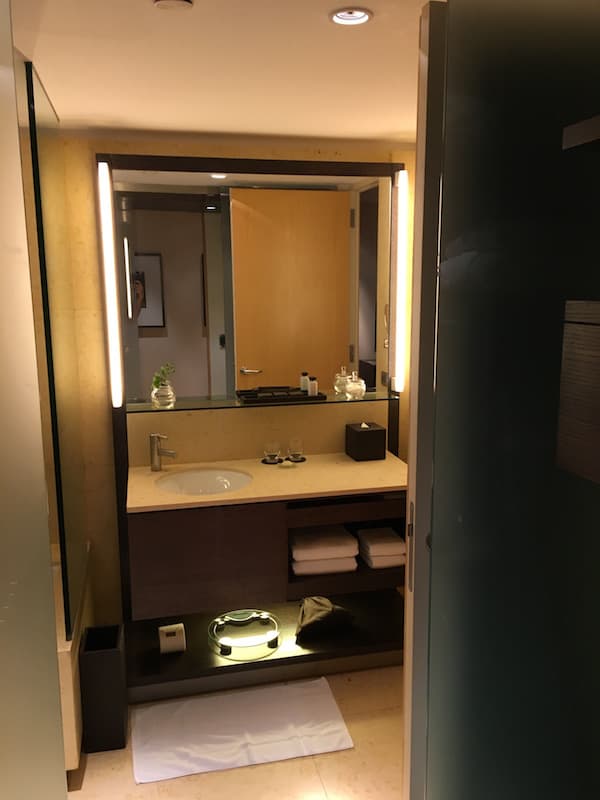 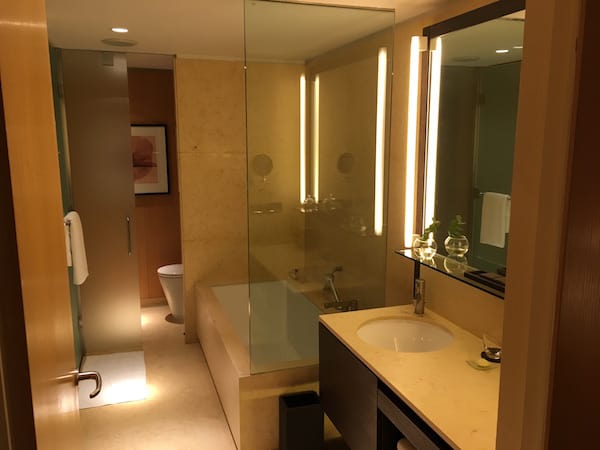 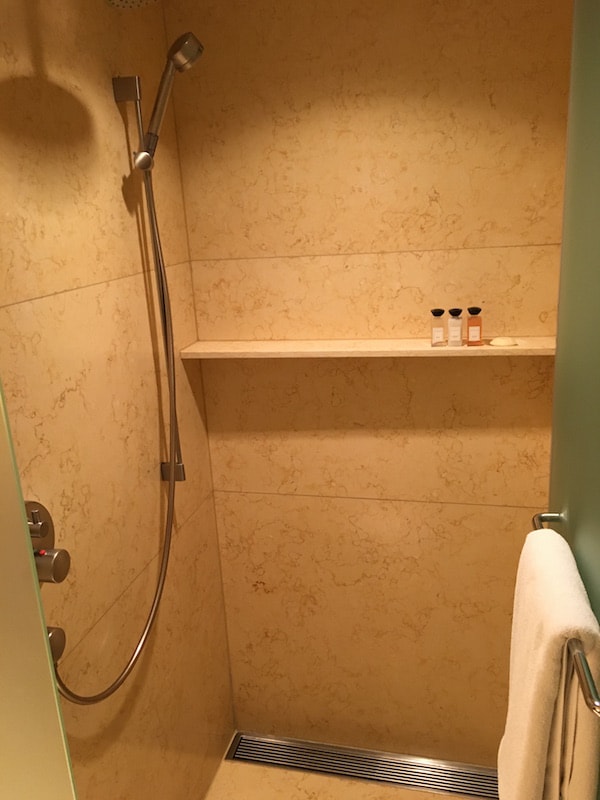 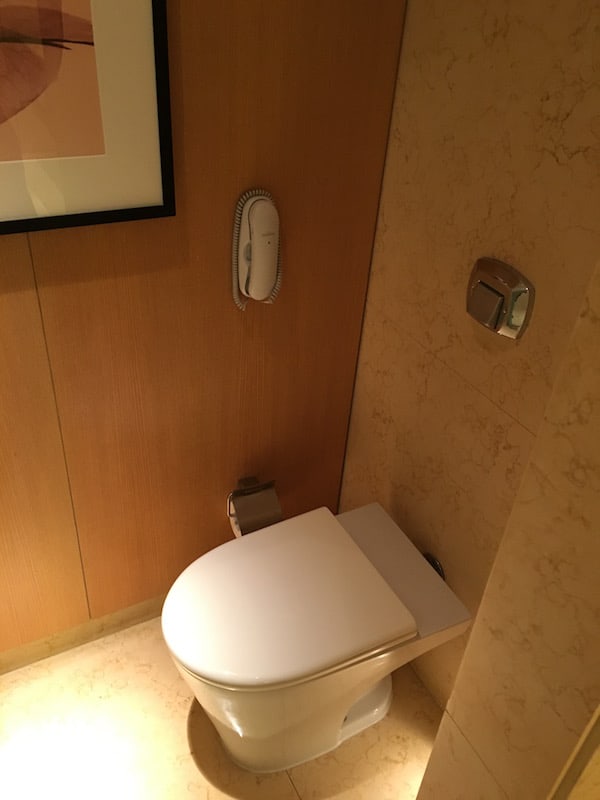 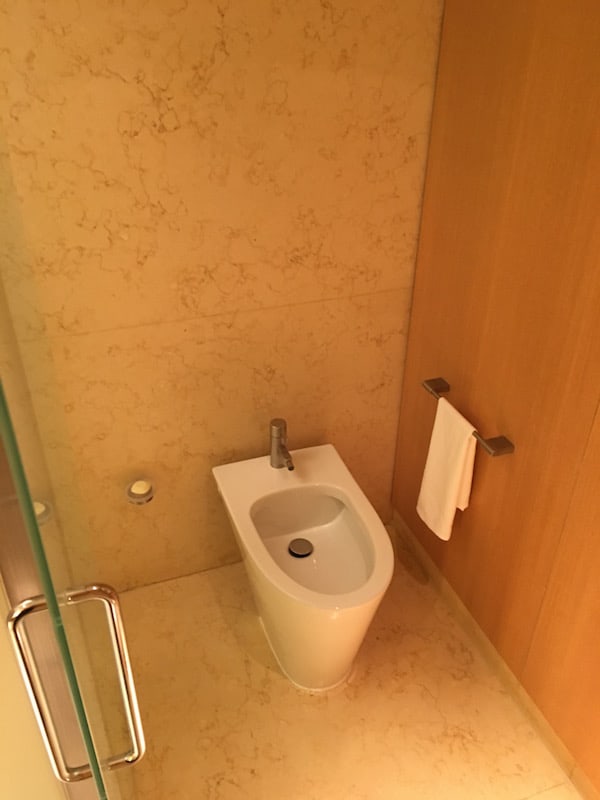 The bath products (labeled Celedonio, a local Buenos Aires company) were okay; not my favorite.  The lotion was highly perfumed which bothers my skin.  I called down to ask for non-perfumed lotion (often times the hotel has baby lotion), and they sent up some very nice sensitive skin lotion that looked like someone had run out to the drug store to purchase.  Very considerate! 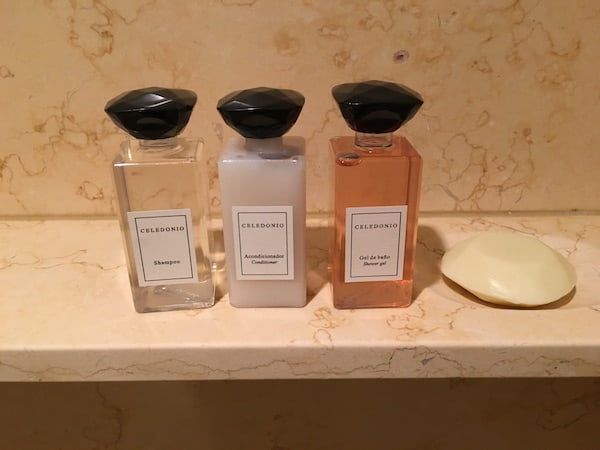 Palace Side Suites: While I didn’t stay in a Palace room, I was given a tour of one of the rooms at my request.  The room I saw was more elegant with modern touches. 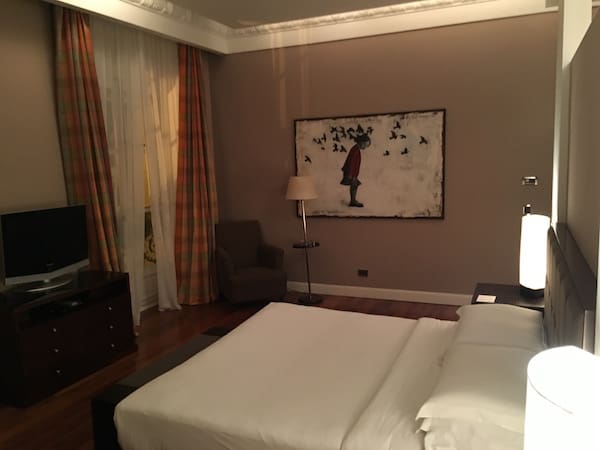 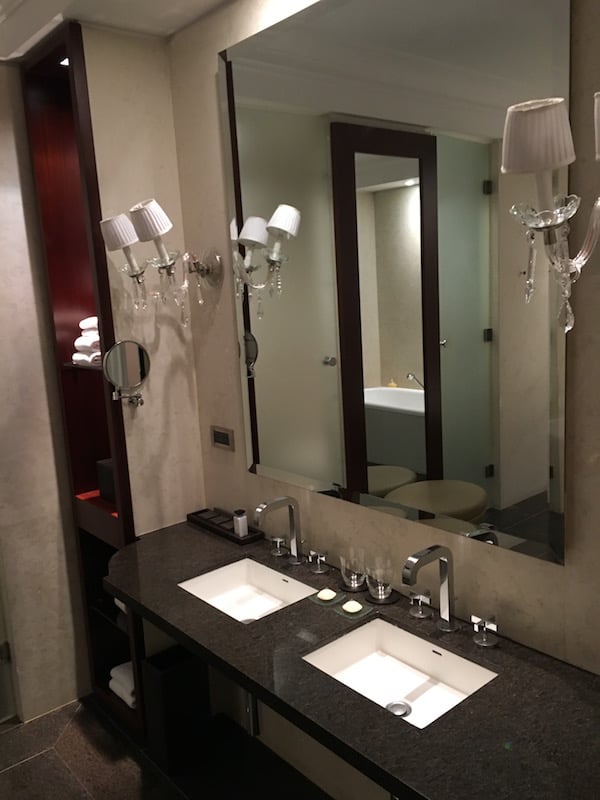 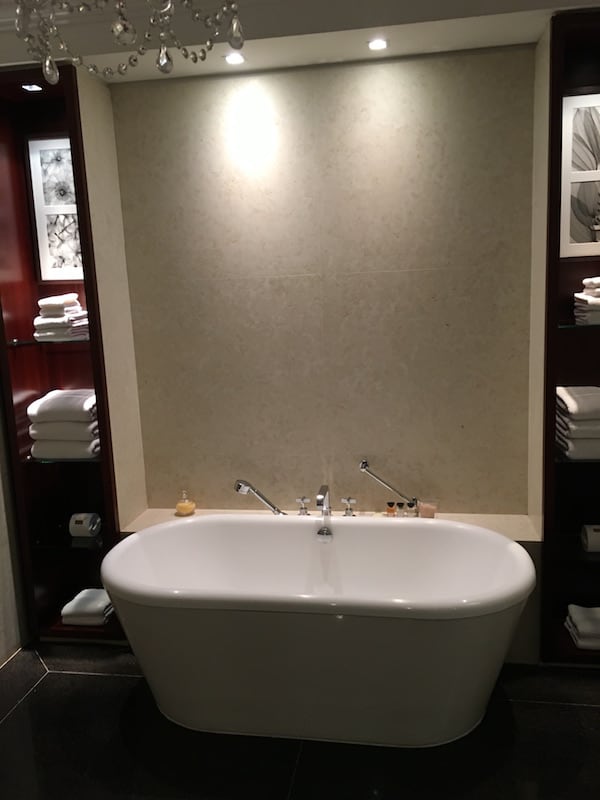 The lobby and lounges on the Palace side were also elegantly finished. 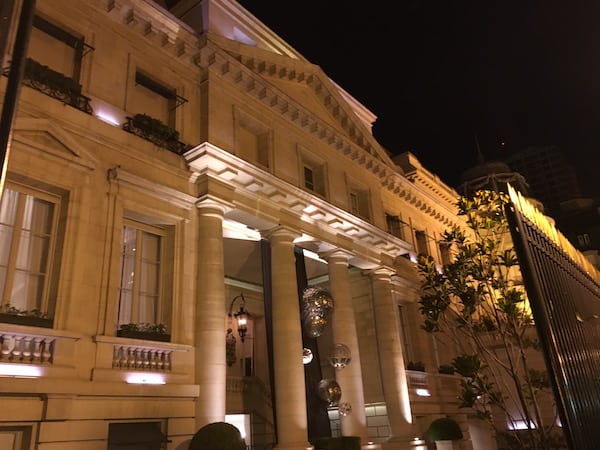 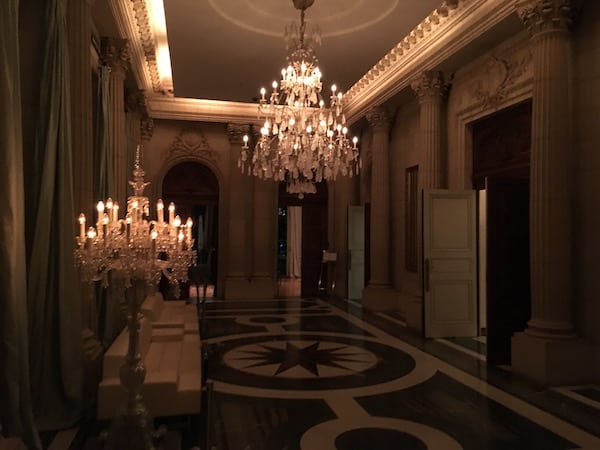 Pool: I found the location of the pool at the Park Hyatt Buenos Aires a bit strange; it was in the basement in the palace side and indoors.  It was a bit of a trek (down an elevator, up a few sets of stairs) from the modern side of the hotel.  I would have preferred a rooftop pool on the modern tower since Argentina has very nice summers.  The pool was a nice enough lap pool, but I didn’t find myself wanting to spend time lounging by the pool. 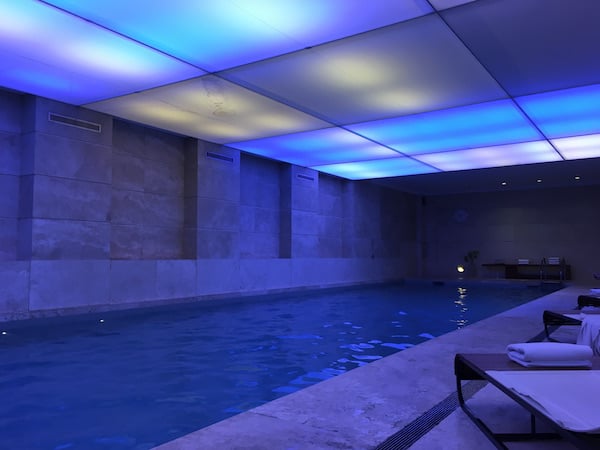 There was also a spa and gym off of the pool area.  I used the spa locker rooms my last day there as my flight didn’t depart until midnight; I wanted to freshen up before heading to the airport.  It was small but luxurious.

Service: I found the service at the Park Hyatt Buenos Aires to be fantastic.  The exceptions to this were never bad service, it was just not as good.  When some staff set the bar so high, there are always going to be times when others don’t live up to it.

There were a lot of staff always around.  I would guess that there were as many staff at any given time working as there were guests in the hotel.  All guests I encountered spoke some English; and all staff that were directly interacting with guests (waiters, front desk staff, concierge) spoke impeccable English.  Every interaction with staff made me feel like I had their full, undivided attention.  I never felt like I was bothering someone with a question or request.  Staff never seemed busy and always put aside what they were doing to help.

I would definitely suggest utilizing the concierge during your stay.  I spoke to at least three concierge staff and all were very knowledgeable and helpful.

On Christmas I had a late dinner at the Piano Nobile restaurant.  Alaine was my server and she was one of the best waitresses I have ever had at any restaurant.  She was interested in hearing about my trip, offered a suggested alternative when I ordered something that wasn’t her top dish, and offered me a perfect wine to compliment my meal.  When I returned two days later she asked about portions of my planned itinerary that I didn’t even remember telling her.  Very impressive.

Housekeeping at Park Hyatt Buenos Aires was also good, maybe too good.  When I had a bottle of wine the first night, 2/3 was leftover.  When I came back to my room the next day, in an effort to make the room immaculate during daily cleaning, it was gone.  Maybe they had corked it and set it aside for me in their wine cellar or something, but I never investigated it further.  All cords left out were tightly bundled up by housekeeping.  Fresh water and fruit was delivered at turn down.  Clothes left out were folded. 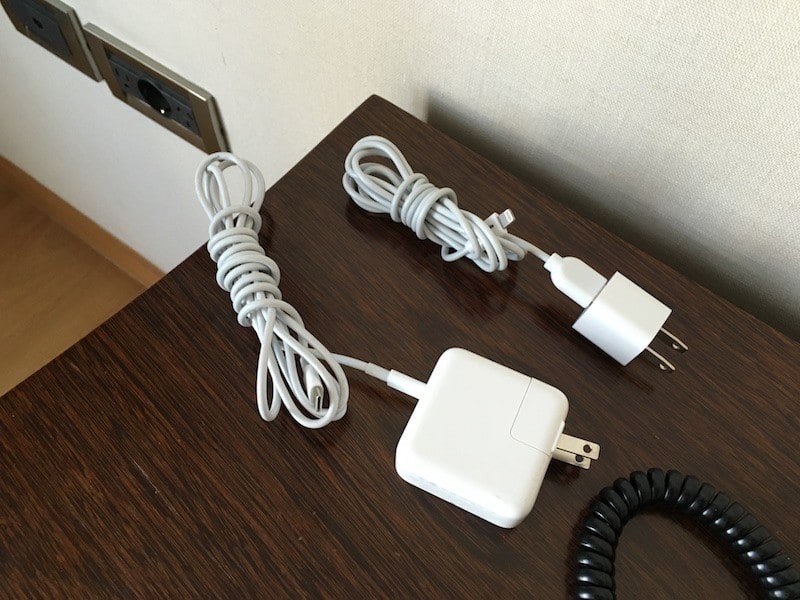 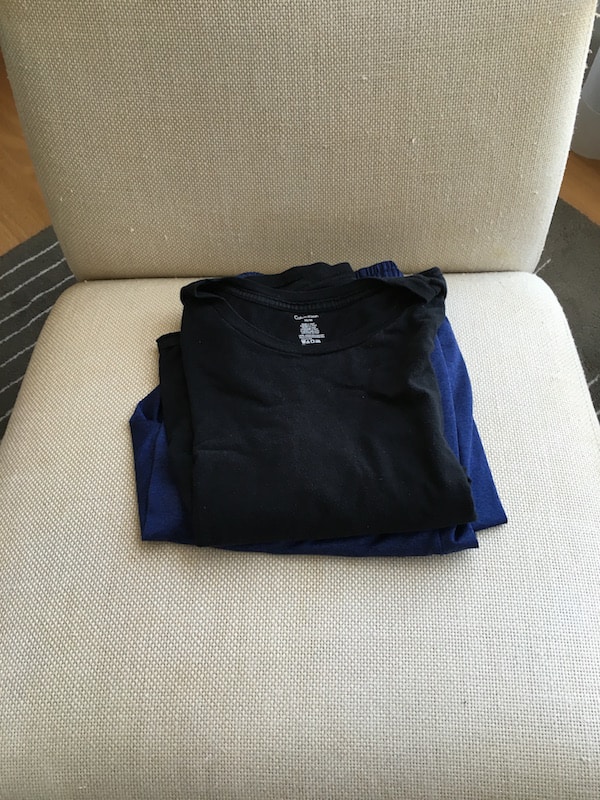 Overall: I would describe the Park Hyatt Buenos Aires as a very good hard product with great service.  Had I been in the Palace side I might have also described the hard product as great.  The grounds are beautiful and the incorporation of the Palace makes you almost feel like you are in a fairy tale.  The location is in the nicest neighborhood of Buenos Aires but is still accessible to the rest of the city by a walk or short taxi ride.  If you can afford it (or are using points/free night), I would have no hesitation to recommend the Park Hyatt Buenos Aires. 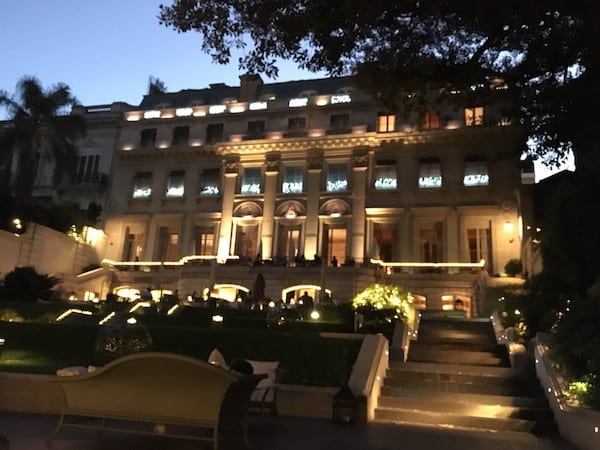 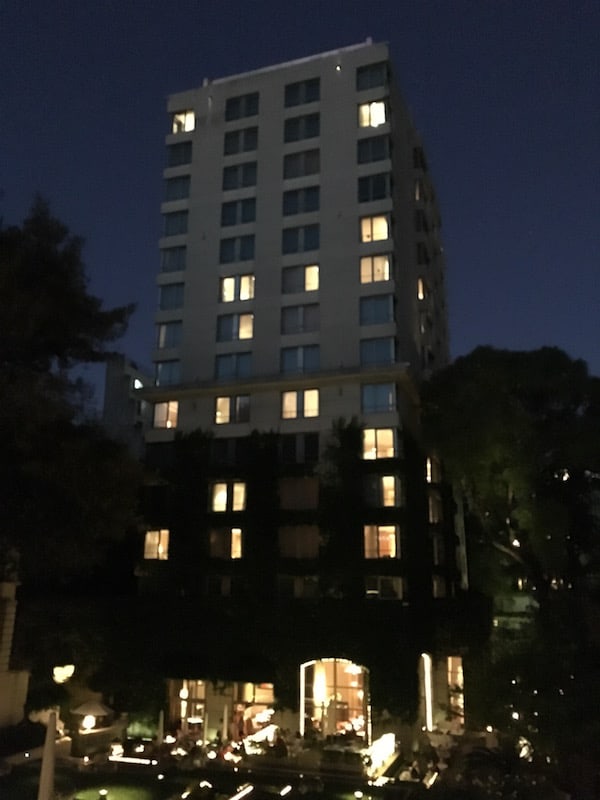