UPDATE: I was able to resolve this though a number of emails and phone calls.  See update below.

I am running into an issue with Hyatt blacking out award nights at the Park Hyatt Buenos Aires.  It is unclear if they are actually holding back rooms or doing some wacky practices in what rooms are available for award reservations.

I will be in Buenos Aires December 24-27.  Granted this is over Christmas, so I expect there to be higher demand.  I was able to book the first night on Points + Cash.  However, the 25th and 26th are unavailable to book with Points, Points + Cash, or with my Chase Visa Award Nights that I earned through my sign up bonus.

However, when looking at the website, both 12/25 AND 12/31 list the exact same room type availability (lowest room is Park Deluxe King), and 12/31 is more expensive to boot!  Yet 12/25 is unavailable to book as an award night.

Hyatt.com only lists the Park Deluxe King when you search ANY date at the PH Buenos Aires.  You literally cannot book the “Park King” (sans Deluxe).  Nor can you see when they are free to be booked with points, awards, etc.

This is my guess as to what is going on:  There is one (or a few) Park King rooms that they set a side for award nights or for points booking.  The number of these rooms may vary; at times they may open up more of the Park Deluxe King rooms for award reservations.

They may be following their own terms and conditions by not technically having black out dates.  But it is pretty clear that they make it very difficult, if not impossible, for someone to book an award stay over certain dates.

Update: I called back the HGP line today (less than 24 hours after initial call).  I explained I was a Diamond member and the rep took my name and HGP number.  She was able to book me a Points + Cash (10,000 points + $125) reservation for the first and second night of my stay (before they could just do the first night, but I still can’t use my Chase free nights).

The third night she got me a Points + Cash (6,000 points + $490) to a Suite in the hotel.  Still no standard Points + Cash or Chase award night availability.  The suite is still cheaper than a standard Deluxe King ($540 plus zero points) so I booked it.

The very helpful phone rep suggested I call back during hotel business hours (M-F) to see if they could open up a standard room for me.

I’m still not sure what to make of all of this!

Update x2: I sent an email directly to the property and today received a response.  The reservations supervisor emailed me back letting me know that they had opened an award reservation spot for me.  I was able to go in and reserve the nights online through my HGP account.  I then called the HGP line and had them combine all my reservations in to one. 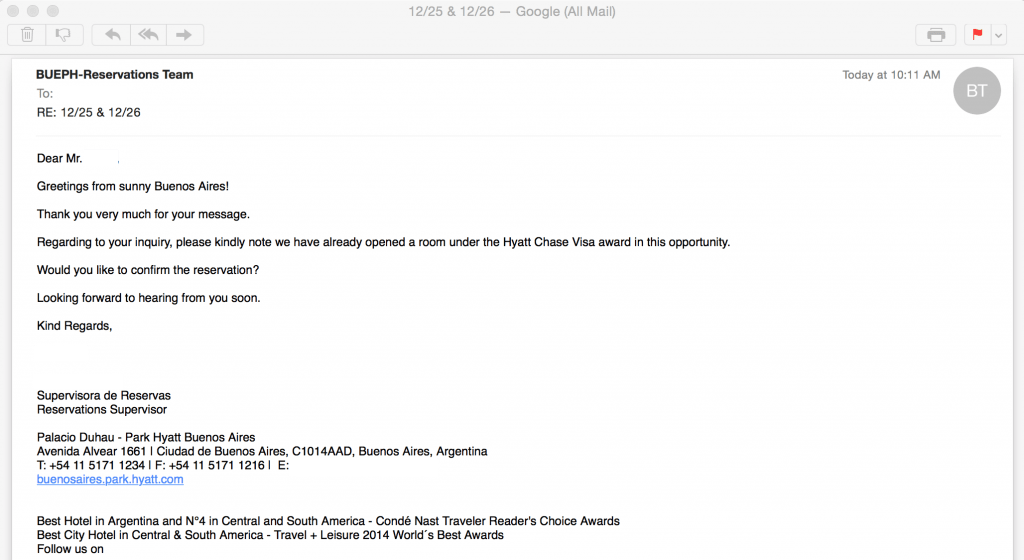 The lesson I learned is that it pays to directly contact the hotel to see if they are willing to open up availability if you are not able to book award nights online.  It seems like they have much greater ability to do this than the HGP line representatives do.