One of my favorite places to travel is Vegas.  I have a great time going with friends, but going alone is a great option if you have the right mindset.  There are a lot of single travelers in Vegas for conferences and work, so you will not feel out of place going solo. In my circle of friends and co-workers, I have become known as the Vegas expert and the go-to for advice on hotels, restaurants and entertainment.

In upcoming posts I will focus on activities in Vegas for the solo traveler, but I wanted to start with one of my favorite forms of entertainment:  Cirque du Soleil Las Vegas.  I will rank them from least to most favorite.

For those who haven’t seen a Cirque show, they are an experience unlike any other.  Part concert, part circus, part Broadway show.  Traditionally they focus on 10-15 acrobatic acts connected through a story line with narrating “clowns”, lately they have shifted away from this formula with creative genius.  The shows tend to be about 90 minutes in length (no intermission, so use the bathroom before it starts) and most of the shows play twice a night in Vegas.  Currently Cirque also has resident shows at Disney World and in Mexico as well as a number of touring shows around the world.

Resident shows are special because they have the ability to build the space for the specific shows.  Therefore the show is able to do things that it couldn’t do in a tent or arena.

Below are my personal favorites.  I have seen all the Vegas shows (except Criss Angel Believe).  If it is your first Cirque show, I would suggest one of the more traditional shows.

7.  Mystere.  This is the original Vegas Cirque residency.  I did not like Mystere and one of the few Cirque shows I would not go to again even if it was free. I thought it was boring and dated, although that was 6 years ago so maybe they have updated it.  However, I have talked to many people who enjoyed it; just not my style.

6.  Zumanity.  The “sensual side of Cirque”, this is a burlesque show.  Definitely not for everyone, there is crude humor and (tasteful) nudity.  I enjoyed Zumanity more than I thought I would, there are some great performances 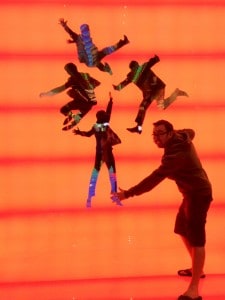 5.  Zarkana.  This is another one of the more traditional shows.  It is worth paying more to get closer on this show.

4.  Ka.  One of the more exciting Cirque shows, this one is centered around sibling martial artists.  Fantastic fight scenes and staging.

3.  O.  The water based production is the favorite of many.  The start of the show is the stage which is a HUGE pool that shifts and morphs seamlessly from water to dry stage.  You won’t believe what you see.

2.  Michael Jackson ONE.  Amazing dancing, great music, special effects better than anything I’ve seen. The visual effects will blow you away; you won’t have seen anything like this before and you probably won’t for another 10 years until other productions catch up.  You MUST be close to enjoy it. I’ve seen it three times — the first time they stopped it about 20 minutes in due to problems with staging. I was in the back row. Next two times I got up close and it was way better.

1.  The Beatles LOVE.  Amazing theater, every seat is good. Good music, spectacular choreography, but light on the really blow you away acrobatics.  I have seen LOVE three times and never get tired of it.  You have to remember to breathe because you will be on the edge of your seat the entire 90 minutes.  I am not a huge Beatles fan and I still loved LOVE.

Cirque shows are huge money makers for Vegas.  Only one has closed (Viva Elvis… a good show but opened during the economic downturn and just didn’t cut it).  If you are wanting go to the latest show (right now, Michael Jackson ONE), be prepared to spend at least $150 per ticket.  You can usually find discounts for the older shows.  If you haven’t tried MyVegas on Facebook, you can earn discounts and free tickets.

Shows are a great activity to do with a friend or alone.  You aren’t going to be talking during the performance and often you can find a single ticket in the front couple rows even if the show is “sold out”.  Treat yourself to a great night out; you won’t regret it.